Three down, three to go 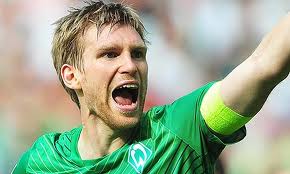 It's finally been a busy day in the Arsenal transfer department. You have to wonder what's been happening throughout the past three months but at least we are seeing some reinforcements come in, even if they're not what most of us were expecting, or hoping for. I'll try to keep this fairly brief as time is of the essence.
The only "confirmed" signing so far is that of Chu (Ju) Young Park from Monaco. This is the kind of signing that shows you just how much the gossip columnists know about who Arsenal might be after. I know nothing at all about him except what I've read over the past couple of days. Hopefully he'll become a bit of a cult figure with the Arsenal fans (and I mean in a Terry Mancini/Willie Young kind of way, rather than an Eboue/Jimmy Carter kind of way). We certainly needed a new striker, regardless of any shortcomings at the back. With Chamakh playing in some kind of parallel universe and Bendtner persona-non-grata we have to hope that the Korean fits straight in.
The other two signings that are seemingly nailed on are Andre Santos and Per Mertesacker. Again, I don't know very much about Santos. There was no doubt we needed a new left-back, even before Armand Traore was sold to QPR this morning. I am disappointed that Wenger has again decided to bring in a player from outside the Premier League as we need men who can hit the ground running. I always have fears over Brazillian defenders on the grounds that very few of them can actually defend (and that includes Dani Alves). It would be nice if Santos can be a bit of a Silvinho and prove a very shrewd acquisition.
I am pleased at the arrival of Mertesacker. When Arsenal were in Austria in pre-season last year it seemed certain that Mertesacker would be an Arsenal player within days (as reported by this site). So it is definitely a case of better late than never as far as I'm concerned. Any centre-half with 70+ caps for Germany is no mug, and at 6'6" he certainly adds some aerial presence to the back four. Having said that I don't think he is the final piece of this jigsaw. We are still short on quality and the fans seem to have seriously lost it with Johan Djourou after what happened on Sunday (a stark contrast to the disappointment that swept through Gooner ranks when he was injured in the FA Cup tie at Old Trafford earlier this year - short memories).
As far as I'm concerned we are still three players short of what is needed (as a minimum). We need yet another centre-back, as I've said above. It is reported that the Gary Cahill chase has been called off. I find that very disappointing. We are also short in defensive midfield areas, yet Scott Parker is signing for Tottenham for much less that £10m. The other thing we need, of course, is a replacement for Cesc Fabregas. This means that big money needs to be spent tomorrow. Only a world-class player can provide anything close to what we've lost. Wesley Sneijder or Bastian Schweinsteiger or Eden Hazard would do for me (with Sneijder or Schweinsteiger the preferred option). If it means spending the fabled "£40m on one player" then it should be done. The lift that such a signing would give everyone can not be underestimated - remember Dennis Bergkamp arriving at Arsenal? Last night we were linked with Yossi Benayoun - if that happens then it should be considered as Arsene Wenger's "Kiwomya" moment.
Hopefully it will still be a very busy final 24 hours in the market for Arsenal. Sadly I won't be in a position to write about it until Friday evening, at the earliest.