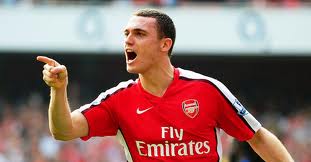 Another heroic display required tomorrow
If we thought we were up against it last week, it has nothing on what we will encounter at Old Trafford tomorrow. I see that Alex Ferguson has been defending Arsene Wenger this week, and he's had more complimentary things to say in tomorrow's matchday programme. This concerns me. Ferguson being nice about anyone tends to mean that they pose no threat whatsoever the achieving of Manchester United's ambitions. With the squad currently available to us it is easy to see why Ferguson might be thinking that way.
There has been the merest hint of a bright spot on the horizon with Laurent Koscielny being passed fit, but Thomas Vermaelen required a fitness test today (result as yet unknown). We have to hope and pray that the Verminator makes the trip as his performance against Carroll last weekend was absolutely peerless. If we are to have any chance of repelling Wayne Rooney then Vermaelen simply has to play in order to combat the sheer physical strength of Shrek's brother, and that's before you get to talking about his ability on the ball. If Vermaelen and Koscielny start tomorrow I would move Johan Djourou in to midfield in place of the suspended Song and Frimpong. We surely can not afford to play at Old Trafford with a potential midfield of Lansbury, Ramsey and Rosicky - we would get turned over in a big way.
With the bad press that has followed United's new goalkeeper in the first fortnight any other team would be looking to pound the United six-yard box with high balls in order to put De Gea under pressure. There is NO chance of Arsenal employing such tactics - not only will Arsene never sacrifice his footballing principles, but we don't have anyone capable of crossing the ball, never mind getting on the end of one. However, our best bet tomorrow has to be to attack United from the off. There is no Ferdinand or Vidic so if there is a weakness then it is in the United defence - if they allow Arsenal to play in the way they let Spurs play on Monday then we might nick a goal or two. Keeping them out at the other end is the issue.
With the way things are I would take a draw tomorrow with great pleasure. It embarrasses me to say that about going to Manchester United, as those with Title ambitions should never be happy with less than three points, regardless of the opposition. Sadly, it's a symptom of where we currently find ourselves. Our chances of getting a point are severely handicapped by the appointment of Howard Webb as referee. Regardless of any perceived affinity he may have with tomorrow's opponent, it can't be denied that he is a cretinous incompetent (at best - I believe, as ever, that there is something more sinister at play with officials in this Country) who should not be let near any major game of football. Ever. It will be a long two hours from kick-off tomorrow, and anything positive from the result will be a bonus.
Posted by DvbrisG at Saturday, August 27, 2011