Benik Afobe - young striker in line for baptism of fire 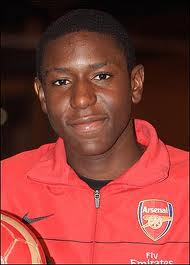 As I write this we are still waiting for Arsene Wenger's pre-match press conference, ahead of the Carling Cup trip to Tottenham. As a result, the team-news is based purely on speculation, but there are a couple of interesting titbits gathering pace. Over the last few days the rumblings have grown more persistent that Benik Afobe is set for a debut. I would have been a little surprised to see him start the match, but I can see the sense in him being the final part in an attacking triumvirate consisting of himself, Carlos Vela and Jay Emmanuel-Thomas. Afobe has been a fairly prolific striker in the youth ranks for both Arsenal and England. A debut now will be coming earlier than expected, but with Van Persie, Bendtner and Walcott all injured, and Sunu and Watt on loan, he is the next man on the list I suppose.
The other potential surprise comes in goal. There are rumours circulating that Sczeszny will play in goal, as reported in today's Daily Mirror. This would indeed be a shock - Fabianski has been on the bench for every game so far this season. If the younger Pole does get the nod I would not be disappointed, and it would be a great test of his mettle in the bear pit the players will experience tomorrow night. Will he play? We'll have to wait and see.
As I've been saying since the draw was made, I would prefer to see a stronger Arsenal team take the field tomorrow night than we would normally see in this competition. Sadly, I don't think my wishes will be fulfilled. I think Arsene Wenger will stick to his policy, and we will be watching the fringe players and reserves in action. Trying to guess Wenger's line-up for such a game is usually impossible, but I like to post what I think the team could be, so here goes:
Fabianski - Eboue, Squillaci, Djourou, Gibbs - Rosicky, Denilson, Lansbury (if fit), Afobe, Emmanuel-Thomas, Vela. Subs: Sczeszny, Nordtveit, Eastmond (to play is Lansbury injured,) Aneke, Miquel, Randall, Hoyte.

The media obsession with Manchester United sickens me. Their game with Liverpool yesterday developed in to a thriller, with Berbatov turning on the style as he scored a stunning hat-trick. Berbatov's second goal was a superb finish, over his head, with his back to goal - an overhead kick, without the acrobatics of Pele in Escape To Victory. I couldn't believe it last night when Sky Sports started describing it as the "goal of the century," and then ITV were at it this morning as well. I may have missed a post match interview where that quote was used to describe the goal, but to go on about it is indicative of the media position as regards Manchester United. The press, and the TV companies in particular, seem to think that we are all in thrall to United. Yes, they are the biggest club, with the most supporters. However, I would venture that 99.9% of football followers around the country despise Manchester United. Most of us respect their achievements over the past 18 years (they did next to naff all in the preceding 30 years) but I am fed up with the overt praise reserved for Man Utd in the press. Berbatov's goal was a superb effort, that can not be denied. But have we forgotten already Dennis Bergkamp's goal at Newcastle? You don't need to have an Arsenal bias to see that Dennis' individual skill was something more original, and unique, than Berbatov's goal yesterday. Goal of the century? Probably not even goal of the season come May.

You might have expected me to pass comment on Fat Sam's newspaper article yesterday where he compares himself on a level with Arsene Wenger. Quite apart from the conceit involved in expressing such a view of oneself, just consider the facts when thinking about such a claim. It is so ludicrous, it is not worthy of comment from me. Silence is golden. And Allardyce is a fat, northern, walrus-faced tosser. Actually, I have passed comment, haven't I?

Here's hoping things are not too bad tomorrow night. There will, probably, be a post after the game.
Posted by DvbrisG at Monday, September 20, 2010