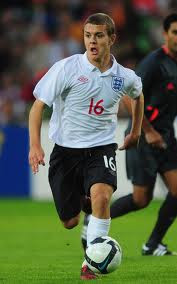 Following on from yesterday Jack Wilshere was again left out by Stuart Pearce this afternoon. In a must-win match I was amazed that England U21 would leave out their best player. If you look at U21 football, notoriously few players go on to be regular internationals at a senior level. From the England squad today I can see only Phil Jones and Wilshere making it. Sheer madness, then, to continue to ignore a player of genuine quality. After a pretty awful first-half there was no option other than to bring on the Arsenal youngster. It was inevitable that Jack would be the creative force to bring England the opening goal. Wilshere made his way forward, looking to the right-hand side, before playing a beautiful through-ball inside the full-back, in the opposite direction - 1-0 England. It is noticeable how Jack Wilshere moves with the ball whilst not actually looking at it, he has amazing awareness. Contrast that with Mark Albrighton of Aston Villa, who scored England's second goal but never lifts his head when on the ball. I have to admit, though, he delivers a mean ball in to the area. Wilshere is on a different level to everyone else in the team I have just watched and it is just plain wrong for Stuart Pearce to have treated him as he has. Wilshere has just created the third goal as I type. Leroy Rosenior, who is summarising on ESPN (and, I have to say, is excellent at the job - Andy Gray and co should watch, listen and learn) has just said what a mistake Pearce made, as Wilshere made all the difference - so it's not just Arsenal bias on my part.

Arsenal Reserves play tonight at Barnet, against Blackburn Rovers. There is no line-up available yet, but I expect a similar team to that which played a couple of weeks back. James Shea will probably play in goal with Fabianski, Mannone and Sczeszny all away on international duty. Henri Lansbury is injured, hence him not being with England U21. It will be interesting to know whether Blackburn's reserve team is set-up with the same "tactics" as Allardyce's first-choice cloggers. If they do go out with the idea of being physical they might think twice about it when they see the man-mountain Jay Emmanuel-Thomas running at them. There is live text commentary on www.arsenal.com. Hopefully there will be highlights available at Arsenal TV Online from tomorrow. EDIT: Lukasz Fabianski IS playing for Arsenal Reserves tonight. Also involved is Squillaci and Denilson in what must be Arsenal's strongest Reserve line-up in years.

The official website has also just informed Arsenal fans everywhere that Samir Nasri is near to a return, though not as near as reported last week - it doesn't look like he will be involved on Saturday. Meanwhile, shock horror, Robin Van Persie will be out for longer than initially thought. Am I surprised? I think not. The latest estimate is mid-October. I won't hold my breath.

Not a lot else today so I'll leave it there. England (and hopefully that means Theo Walcott) are in action tonight so I will settle down and watch it I think - a review of Theo's performance tomorrow.