Fabianski - credit due to the Pole in goal 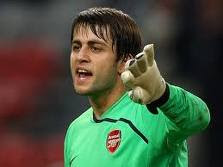 I am feeling a little sore as I write this. I played about an hour today in the annual old boys game for my employer - I am now an old boy apparently. I used to be young and fat, I am now old and fatter. For the record we lost 3-1 to the young pups, and I came close to scoring twice (neither of them in my own goal!) The soreness is from a knee that has stiffened considerably since I tried to kick the opposition goalkeeper for dribbling round me in his own six-yard box. I suppose that precludes me from the sympathy I clearly deserve.
On to the more important stuff.
Arsenal got away with it last night. Following a bad start, where Squillaci was given the serious runaround, Arshavin (who had a fine game, apart from his finishing) and Wilshere (outstanding again) combined with a bit of class to create the opener. It came as no shock to me to watch Arsenal then fail miserably in front of goal. The profligacy that has cost us so often is still there with Arshavin and Rosicky missing the opportunities to have put the result beyond doubt. It came as no surprise when we conceded a stupid penalty, which was dispatched confidently. Arsenal really have got to be more clinical - they won't get away with being so wasteful against a quality team. In the second-half we dominated again and eventually got our reward, despite Arshavin's missed penalty. Chamakh was ever willing up front and his physical presence earned him another goal, before Squillaci made it safe - or so I thought. From the kick-off the whole team went to sleep, with Gibbs doing a very passable Gael Clichy impression, giving away another penalty. Fabianski saved it, and still had time to make another fine save before full-time.
Arsene Wenger stepped back in to the world of mystifying substitutions last night. Chamakh and Wilshere were both withdrawn at 2-1, and then Clichy was introduced on the left-wing. The thinking was clearly to protect Chamakh and Wilshere ahead of the Chelsea game, but last night's match wasn't secure at that point. The final sub though was ridiculous - Lansbury should have come on, with Rosicky switching sides. As it was it didn't matter, but we could do without a return to the days of "subs on seniority."
So, what about Fabianski? His performance last night was, as Arsene Wenger said, faultless. Playing under such pressure, with everyone just waiting for your inevitable error, must have been incredibly difficult. When he saved the penalty, Fabianski visibly grew in confidence and was quickly off his line to deal with two crosses in the next few seconds - I am sure that, before the penalty save, he would have been rooted to the line in fear. I think he has secured his place for Sunday and, while I still think he is nowhere near good enough, credit is very much due to the Pole. Congratulations Luksaz - we'd still love to see you make it at Arsenal. As Jack Wilshere said after the game - "fair play to him."
Apart from Arsenal's wastefulness in front of goal, and Fabianski's heroics, one other thing really caught my eye last night - the performance of Alex Song. For some reason Song has developed the idea that he is some kind of midfield playmaker. In the last couple of minutes last night he had taken it upon himself to play at centre-forward, and that is why Fabianski had to make a magnificent save late on. Every time Song got the ball last night (and on Saturday) he wanted to take on the opposition midfield. Inevitably the ball was lost and the move broke down - every time. Alex Song does not have the football ability to play in that way - quite apart from the fact that he is leaving our brittle defence with even less protection. Please, Alex, leave it to the players with ability to create the chances - in the meantime get back behind the halfway line and do what Gilberto used to do. After all, that is your job in this team!
Ultimately, of course, we got our three points and that is the most important thing. Six out of six in our group and a home win in the next game would virtually guarantee our progression in the competition.
Next up for the boys is Chelsea at the West London meccano set on Sunday. The team news should be available at some point on Friday, and the next blog will be at some point that evening - I have a very important "gentlemen's day" tomorrow and then I will be parked in front of the telly from 7.30 on Friday morning watching every shot of the Ryder Cup. If we can get the three points at the Russian playthings, and Europe can stuff the Americans, it might just be the weekend from Heaven.
Posted by DvbrisG at Wednesday, September 29, 2010