More reflections on last night, Sczeszny needs to pipe down 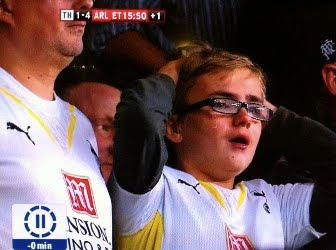 I couldn't resist the picture above. Just imagine the pain that poor little sod has been in today. Quite apart from seeing his muggy Spurs team getting a footballing lesson from the only team that irks them, but all his mates at school (assuming he has any - debatable being a Tottenham supporter) will have been ripping the arse out of him all day long for crying on television. I laugh every time I look at the picture. Only the pure hatred they feel towards Arsenal could elicit this kind of reaction to their battering last night.
I hope you've enjoyed your day at work as much as I have. I never rub it in verbally, as I believe that is the preserve of those who do not ever go and watch their team play. My preference is to smile at people who follow the opposition, and to keep smiling at them. Today this has been easy to do. The smiling also provokes a reaction. Two of them got fed up with me grinning at them today and came over to ask when I was going to say something. I replied that there was nothing to say after such a walkover and, anyway, it's far better just to laugh at those less fortunate. When the steam had dispersed, I continued to grin inanely at every Tottenham clown in the office (and there was no shortage today!)
If ever anyone begins to doubt why they follow their team, I hope they get the chance to experience the kind of feelgood factor flowing through the body of every Arsenal fan today (unless they happen to follow one of our rivals of course.) Today has been one of the best days of my year, and it's all thanks to Arsenal.
I particularly enjoyed the Arsenal fans rendition of "shall we make a DVD?" during extra-time last night. Obviously Tottenham's supplier was hoping for another bulk order ahead of the match. Haringey Borough Council also had to postpone plans for the open-top bus ride and civic reception planned for the Spurs team this afternoon.

Before the game last night I read a truncated transcript of an interview given by Wojciech Sczeszny to a Polish newspaper. It's wise to be fairly sceptical about such interviews due to problems with translation - Arsenal players have been stung by such issues in the past. However, if you don't give stupid interviews, there is no danger of stuff being lost in translation. The crux of the interview is that Sczeszny has thrown his toys out of the pram due to being overlooked so far this season. He believes Wenger has lied to him. Sczeszny revealed that he had been left out of the squad for last night, before the team was announced - this is unacceptable. Reading between the lines I believe he has been disciplined by the Manager, following some kind of argument, and his punishment was to be left off the bench last night (hence the shock inclusion of Almunia.) Sczeszny has then compounded the problem by giving this interview.
The lad is clearly frustrated, as anybody would be with Fabianski ahead of them in the pecking-order. However, getting all "Billy Big Bollocks" about it is not the way to go. The last two players to give it the big'un about how good they were, and how they should be in the Arsenal team, were Jermaine Pennant and David Bentley (one of them is in football purgatory at Stoke City, the other is a regular for Tottenham Reserves.) With Fabianski's latest mistake, the younger Pole might well have found himself moving up a level in the ranks. His outburst, however, should see him relegated back behind Vito Mannone in my view. Sczeszny may be very good, none of us can really say at this stage. Self-confidence can be a good thing - just look at Jack Wilshere. But shooting your gob off is not the way forward.
If I can give Wojciech some advice it would be this - work hard, keep your head down, and show what talent you have. With the number of mistakes made by Almunia and Fabianski you might just find that, like the "bear-necessities," the chance to play for Arsenal will come to you. In the meantime, shut your Polish trap and get on with playing football you arrogant little toerag.

I'm off out for Chinese tonight with the wife and some good friends. The sweet and sour will taste all the better after last night. Still can't stop smiling. Or laughing at that little twat in the picture!
Posted by DvbrisG at Wednesday, September 22, 2010