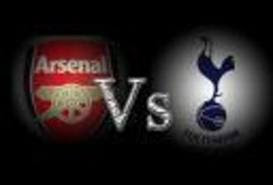 4-1. Four - One. FOUR - ONE. It doesn't matter how you write it, it looks bloody magnificent when it's the result against those mugs. Arsene Wenger surprised us all (very pleasantly) with the line-up and, more particularly, the bench. He certainly took Twitchy by surprise, and should be credited for not throwing the game away - who knows just what this kind of result can do to the confidence of the boys? The line-up was also a reflection of the strength and quality in the squad, as opposed to the past few years. I think this was certainly the strongest Arsenal League Cup selection since Wiltord's hat-trick against Man Utd - we had a strong squad in those days too.
At 90 minutes I was ready to pen a piece entitled "another game, another official, another goalkeeping calamity." Let's be honest, if the referee and one of his linesmen not been totally incompetent we would not have needed extra-time to complete a hammering. In fact, we wouldn't have even needed a second-half. Quite apart from a complete failure from the referee to protect a dominant Jack Wilshere (I think only the Spurs keeper didn't get to kick him,) Arsenal should have had a penalty after five minutes, and the offside decision against Kieran Gibbs was nothing short of scandalous. For the same linesman to then not flag Keane offside, the caravan utilising nomadic traveller, for the equaliser made things even worse. Fabianski's contribution to the goal was not unexpected. Hopefully we have finally seen the back of the Pole. It's a shame, but he is simply not up to it. The referee finally got his act together in extra-time when finally giving two penalties to Arsenal - though somehow the perpetrators of the fouls stayed on the pitch - the second penalty was a stick-on red card.
Arsenal were outstanding tonight, from start to finish. It would have been an injustice for Arsenal not to win the match. To win it 4-1 made the scoreline a more accurate reflection of the game. It's a shame Nasri bottled the penalty on Saturday, or we could be two points closer to Chelsea. Jack Wilshere is set to become some player. I first saw him three years ago, playing for the Reserves, and he is on a different level to any other young English player I have seen at Arsenal. Sky have just awarded man-of-the-match to Samir Nasri for his two penalties - disgraceful in my view. I very much doubt Jack will start the game on Saturday though, his shins will be a horrible shade of purple, such was the kicking he got.
The Arsenal fans were so loud tonight, clearly heard throughout the game. Alan Parry said in the first-half it was a great atmosphere - but that was only due to the onslaught from the travelling Gooners. I hope those in red and white (they must be bloody crazy) find a way to cover up before heading up the Seven Sisters Road, or it could be a very long, and very violent, trek.
Apart from the 4-1 (FOUR-ONE) win, there were two further highlights tonight. The first was the little Spurs fan, about ten years old, with tears streaming down his cheeks - I hope one of the bloggers tomorrow can find a link. That was priceless. The other was a World Record for twitching, set by Harry Redknapp when on camera in the last minute - I counted three seriously violent twitches in less than four seconds! How does he not pull a muscle? I hurt my neck during the home game with them last season while doing my twitching impression, but Harry's a pro, and he has it down to a fine art I'm sure.

I hope to find time to post a blog tomorrow afternoon as I have some comment to make on Wojciech Sczeszny and his interview with a Polish newspaper. Tonight, though, is not a night for any negativity whatsoever.