Marouane Chamakh - not as good as Bendtner apparently 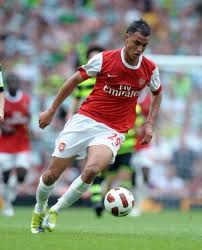 I follow a page on Twitter called "c*** of the day." If I was choosing today's recipient of the accolade it would have to Steven Howard, sports editor of The Sun. What a prick this guy is. Regular readers of his column will know Mr Howard to be that rarity in sport - an "expert" on anything and everything, from football to rugby league, and from boxing to golf. I've no doubt you're getting the idea that I dislike him, and you would be right. Today he has decided to pick on Arsenal following the defeat on Saturday and I am now convinced, having read it, that we must be candidates for relegation come May. Howard has dissected every part of Arsenal's team and concluded they are utter crap. Bear in mind that he was almost certainly NOT at the game on Saturday, and NOT at any game Arsenal have played all season. From this fine vantage point he has managed to conclude that Arsenal can not win the Title with Manuel Almunia in goal - fair enough. And that Fabianski is not good enough either - you don't say. The full-backs are rubbish - they were on Saturday. Koscielny and Squillaci are crap because they are new to the Premier League - interesting logic from someone who knows even less about the pair than the average Arsenal fan does. Worst of all though, is his assessment of Marouane Chamakh. The Morrocan has been rightly lauded by the Arsenal fans for his contributions so far this season - strong and powerful, dominant in the air. But not according to Steven Howard. This cretin describes Chamakh today as "too lightweight" and poses the question "is he really any more effective than Nicklas Bendtner?" Now I'm a big fan of Bendtner, and consider him to be under-rated, but to ask such a question shows just how much Steven Howard knows about football. The man is a prick, a tosser, a muppet and a mug, and I would love to meet him one day - he is moving in to Sheringham and Michael Parkinson (I hate that sycophantic northern arsehole) territory in terms of how much I'd love to say my piece to his face. That's just MY opinion, you understand, but that's why I write this drivel (though it's far better quality drivel than you will read in The Sun every day).
I'm sure I'm not the only person with a wry smile at the complaining of Mick McCarthy and Tony Pulis after their games yesterday. McCarthy, who has sent his side out to systematically kick teams off the park this season, is moaning that Stephen Warnock wasn't sent-off yesterday before setting up Villa's winner (a justifiable gripe I have to say). Though McCarthy has quickly forgotten Karl Henry's numerous assaults on Joey Barton three weeks ago. He also complained about Steve Sidwell breaking the leg of a midfielder whose name I can't pronounce. It was a pretty awful challenge and I winced when I was watching it live. Again, though, you live by the sword, you die by the sword - Karl Henry (that name seems to crop up a lot) broke Bobby Zamora's leg a fortnight ago, and McCarthy wasn't complaining then, was he?
The subject of leg-breaking brings me conveniently to Stoke City. Pulis has moaned about diving in the game following an incident with Joey Barton yesterday. Rightly so - diving is deplorable. But Pulis wasn't really moaning about Barton, so much as using it as an excuse to get at Arsenal - from nowhere he accused Nasri of diving at Tottenham in midweek. Mr Pulis really should get a life. He is not intelligent in the way he delivers his digs - unlike Arsene Wenger - and he lacks subtlety and class. Another muppet to add to the list.
I haven't forgotten that Arsenal are playing in Europe tomorrow, and there is some big team news. Manuel Almunia has an elbow injury, apparently, and Arsene Wenger was quick to say that he would have played if fit. I find this hard to accept as a statement of truth. I believe Almunia has been taken out of the firing line, and will not be back in the side if the other keepers come in and play well. Fabianski replaces him tomorrow night (God help us) with Sczeszny getting a place on the bench. I suspect that, if Fabianski has yet another nightmare tomorrow, young Wojciech might just get his wish on Sunday at Chelsea - it would be a huge risk in such a big game, but it would certainly be an opportunity for the younger Pole to put his money where his mouth is. I have to say I feel sorry for Vito Mannone in all of this as he appears to have been frozen out - he might play for the Reserves at Barnet tonight, against Blackpool. In the other team news, Abou Diaby is not in the 18 man squad, presumably dropped after his awful showing on Saturday, whilst Kieran Gibbs is back. Henri Lansbury has replaced big Jay Emmanuel-Thomas in the squad. I can see changes being made to the back-four - God knows there should be, and Jack Wilshere will come back in alongside Alex Song. Here is the team I would go for:
Fabianski - Sagna, Djourou, Squillaci, Gibbs - Song, Wilshere, Nasri - Arshavin, Chamakh, Rosicky.
Unfortunately I am working tomorrow evening, so the Sky+will be employed for the game. I hope to watch the match, without knowing the result, when I get home. I'm then at work again early on Wednesday morning, before making my annual appearance as a player in the afternoon - a sore day lies ahead on Thursday. Next blog will be Wednesday evening, with the game in Belgrade featuring strongly, as you would expect.
Posted by DvbrisG at Monday, September 27, 2010