Clichy - time to sit on the bench 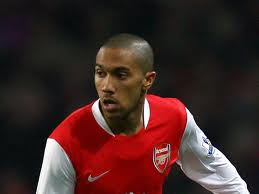 I would have written a post last night, but I was still steaming at the result at 10pm last night and felt an incoherent rant would not have made the best reading. Losing a goal in time added on (after injury time) meant Arsenal failed to take three points from a game they controlled in the last 30 minutes, but on reflection, Sunderland were probably worth their point. That doesn't make it any less annoying though.

I've made mention of Gael Clichy's form on more than one occasion recently. His performance yesterday was woeful, culminating in his comedy effort at clearing the ball, which fell to Bent for the equaliser. I have run out of patience with him. Two years ago I felt he was far and away the best left-back in the country - I even had his name put on my shirt. Ever since the Birmingham game, where Eduardo broke his leg, Clichy has gone backwards. His play has become more and more erratic, his attacking increasingly frustrating. He doesn't concentrate properly (witness his attempt to beat a man in his own penalty area last night) and he continues to make the exact same mistakes he made as a boy in the Invincibles season. When Clichy strides forward with the ball, with such pace, he looks so impressive, but he seems more and more clueless these days as to what he will do with the ball. I have no doubt that he was shooting yesterday when he put the ball out for a throw-in. His crossing is aimless and abysmal (even more criminal with a fine header of the ball playing at centre-forward.) There were times yesterday when he looked lost for ideas when in possession in advanced areas. Then there was the goal. Why was he trying to scoop the ball like that? Put the ball out of play and defend the corner if necessary. Instead of that he mis-kicked the ball straight at Koscielny and it fell fortunately for Bent. Two points dropped. Hopefully it will also mean Clichy dropped.

I have picked on Clichy simply because my patience with him has snapped. He was far from alone yesterday in his performance. The one thing that can not be aimed at Gael is an accusation of lack of effort. Unlike our Russian forward. Arshavin was a disgrace yesterday, as he has been in most games this season (and late last season.) It's all very well being enigmatic, but at times you can get by if you work hard enough, even if form is proving elusive you in some way. Rosicky's penalty was awful (I can't understand why Nasri wasn't taking it) but I would have the Czech in the side rather than Arshavin next week.

And now the referee. Why do I feel I am always having to comment on these idiots? Alex Song was sent-off for two bookings. His first was given for an incident that saw Henderson dive, and the referee had himself influenced by the crowd. The second booking was a cynical body-check which was downright stupid from Song in the circumstances. We got a penalty with a decision that even Mr Dowd could not have got wrong. He somehow found four minutes of injury time, and the equaliser came long after the four minute mark had passed. Yes, it's a minimum of four minutes, but how often do you see it played on - remember Everton being stopped in their tracks last week? Mr Dowd will be pleased today because Arsene Wenger's comments after the game were aimed at him. Dowd seems to be one of the referees who craves the spotlight in matches he officiates. Added to this, the man is at least two stone overweight, that's why he gets so much wrong.

So what positives from yesterday? Another ninety minutes for Jack Wilshere. After a poor first-half I thought the youngster was superb in the second. Nasri and Rosicky ran the midfield in the final half-hour, combining really well to keep possession and move the ball forward. Chamakh was strong and dominant up front, though visibly tired in the final ten minutes - this is not a surprise given the work he has put in these past few weeks. I have been seriously impressed by Chamakh, whose hold-up play puts me in mind of Alan Smith. Almunia had a solid day again. Koscielny and Squillaci looked better yesterday. In the final few minutes, with the ball being planted in to the box, Squillaci showed his aerial prowess as he attacked and won everything, right up to the goal where I think he may have been fouled as he went to clear. So it wasn't all bad.

Chelsea will be licking their lips after our last minute disappointment. They play at home to Blackpool today and I expect them to match our six goals at least. That means we will go to Stamford Bridge in a couple of weeks knowing a defeat could be the death-knell for our Title hopes, even this early in the season. With United not looking great, and facing Liverpool today, Chelsea could be in a position where a win against Arsenal sees them heading over the horizon in early October - and that really would be unsatisfactory for the Premier League.

Arsenal's next action is against the mugs from White Hart Lane on Tuesday. Arsenal's line-up will be yesterday's bench, plus a number of fringe players (and possibly Vermaelen/Diaby - though that would be an unexpected bonus). I expect us to get mullered as Twitchy dare not put out a similarly weak team and lose in Tottenham's extra "cup-final" against the old enemy. If you're working Wednesday be sure to check the wood work as, if we do get beaten, there will be Spurs "fans" coming out of every crack.

Finally, thanks to Kevin Whitcher, editor of The Gooner for his generous plug in Thursday's online editorial piece. Remember, you can follow the blog on Twitter (@ARSENALDvbrisG) and on Facebook (It's MY Arsenal Opinion)