Welcome to Arsenal - I hope it's Hell 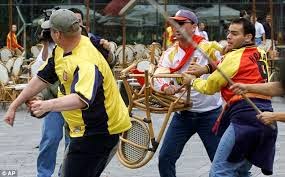 In recent times the Champions League group phase has lost a lot of its attraction. Over familiarity between the teams has meant that many can take or leave it, despite Sky's exhortations that it is something special. There is no longer anything exotic about playing Borussia Dortmund or Olympiakos or FC Porto - we've seen them all too often. Barcelona and Real Madrid remain a big draw, but we've had to get beyond the second round in recent years to get close to playing against them. Tomorrow, however, sees a group phase fixture with something a little extra added to it.
For the many thousands of us in Copenhagen in May 2000 the name Galatasaray represents a horrible day for Arsenal and our supporters, rounded off with a failure to convert chances and penalties that saw us leave without a trophy. What went on during the afternoon, however, is what the trip to Denmark is most famous for. It is the reason why many of us know that Galatasaray represent the scum of European football.
We always knew that there was likely to be trouble that day. Two Leeds United fans had been stabbed to death in Istanbul before their semi-final out there, and plenty of the Leeds boys were going to be in Denmark for our game. Put together with our own supporters of a similar leaning and it was always going to kick-off if the Turks provoked it again. It actually started the night before the game with stabbings in the city centre - those of us arriving at Gatwick early the following morning were offered full refunds by Arsenal if we decided not to travel (I believe two lucky sods chose to take up the offer). On arrival at Copenhagen airport we were met with Galatasaray fans giving their slit-throat gestures right in our faces. It was the same in the city itself. They were the most horrible fans I've ever come across.
What went on in the main square is well known. We spent the day in an Arsenal only pub (well, two Arsenal only pubs actually) and were fortunate to get on one of the very few coaches that actually came back in to the city to take us to Parken Stadium. Most of the others had to literally fight their way to the ground. All of this was because of the Galatasaray fans. Somehow they weren't banned from Europe for their behaviour, not just in that season, but in previous European campaigns - remember Manchester United fans and players being attacked in their stadium and outside?
Well plenty of people have long memories, just like me. And I've no doubt some of them are looking forward to tomorrow night. I know Galatasaray were invited to the Emirates Cup last year and that was relatively peaceful (though not without incident) but tomorrow is the first proper game between the Clubs since that day in 2000. There are men still banned from Arsenal for things they didn't do in Copenhagen (as Piers Morgan knows). There will be others with physical scars from the knives and iron bars. All of this leads to some pretty bitter feelings. I hope that Arsenal smash Galatasaray on the pitch tomorrow night, and I reckon Leeds might be backing us too. Outside the ground I'll be keeping my head down, but I hope the law have got the Turkish fans well marshalled all over the area.
Posted by DvbrisG at Tuesday, September 30, 2014