The real Arsenal player of the month 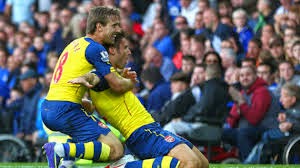 Celebrating the goal he created at Everton

I was dismayed, though not surprised, to see Arsenal's official website announce Calum Chambers as the "fans" player of the month for August. Given Arsenal's own media output advocating the qualities of Chambers since his arrival it was no surprise that plenty of these "fans" were motivated to vote for the new boy. Personally I am yet to be convinced by him. He is certainly very promising, and looks excellent on the ball. The counter to that is the way he dives in to the tackle, often leaving himself hopelessly beaten. Chambers has plenty to learn and I really can't accept that he has been Arsenal's best performer since the season began.
For me there has been one player that has stood out at the start of this campaign, and it is somebody who goes about his business very quietly. Last season Nacho Monreal looked a poor player when standing in for Gibbs. His only impressive performances came as a late substitute in a number of matches where he sat in front of Gibbo on the wing. When playing at left-back he was slow and almost always out of position. Since Gibbs got injured against Palace Monreal has had his chance again and he is taking it with both hands. The Spaniard has been superb at both ends of the pitch, and was even impressive as an emergency centre-back against Man City at Wembley.
Nacho looks a yard quicker all of a sudden, and is physically stronger. He is picking his moments when going forward, leading to him being able to defend far better. When he has gone forward he has done so to fine effect. His cross for Giroud's late equaliser at Everton was a peach, and he also set up Oxlade-Chamberlain with an open goal at home to Besiktas with a perfectly weighted pass behind their defence. As improvement goes Monreal's is right up there with the most impressive at the moment.
Kieran Gibbs now has a problem. His inability to stay fit for more than five minutes has meant that an adequate deputy was always required. Monreal had rarely looked anything more than that. To me Kieran is the best left-back in England and should walk in to the national team. However, he is far too fragile and spends too long out injured on a regular basis. If Monreal can keep up his form of these last four weeks then he could very well keep his place in the Arsenal side, and a player of the month award would have been fully merited.
Posted by DvbrisG at Wednesday, September 10, 2014