We can't rely on Calum Chambers - an accident waiting to happen 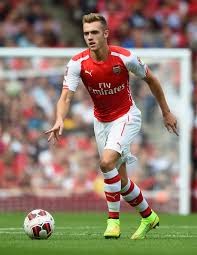 Getting away with it

It's been a week since I wrote anything. The time in between has been mixed for Arsenal. Ozil and Welbeck combined brilliantly in an inspired five minute spell at Villa Park on Saturday (and long may that continue) before the experienced players let down the youngsters in the League Cup on Tuesday evening.

The match at Villa saw Arsenal gain an exceptional away result. The way the game was won had echoes of The Invincibles with the quick-fire goals and the boring second-half of passing the ball about aimlessly. The highlight, of course, was the apparent return to form of Mesut Ozil. Leaving aside his involvement in the first two goals for a moment, the most encouraging thing I saw from Ozil was him charging to close down an opponent, and the speed at which he was moving - these were things we haven't really seen since his first few games for Arsenal last year.
When it came to the first two goals they were an absolute joy. The move that lead to Ozil's goal was outstanding, with the final pass from Welbeck played to perfection. To see Welbeck pick that pass, with such magnificent weight and angle, was wonderful. It took Senderos completely out of the game and picked the run of Ozil without him having to break stride. The finish from Ozil was similarly superb, with the slight delay on the shot giving him the perfect range to simply pass the ball beyond Guzan and in to the net. The second goal was a showcase for what Ozil can do as a creative force. The cross to Welbeck was crying out to be buried, played with such accuracy around the nearest defender for the run of the centre-forward. The two passes for Arsenal's first two goals were exceptional and would have been worth the admission price in their own right.
There was one thing that concerned me on Saturday, and that is Calum Chambers and his continuing propensity to dive in and give away chances to our opponents. It took an outstanding save by Szczesny to keep us at 0-0, but he wouldn't have needed to make it had Chambers not left his feet to deliberately chop down his man in a dangerous area (the defending of the free-kick was equally awful, with Kieran Gibbs just stopping dead as Clark ran on to head the ball unchallenged). I mentioned the other week that Chambers concerns me and that he has been artificially feted by the fans in the early part of his career at Arsenal. He is, of course, extremely young but he keeps making the same mistake in almost every game he plays. Put together with a serious lack of pace and he is a liability Arsenal can not afford at full-back for three months. As you will see below he was also at it in midweek against Southampton. 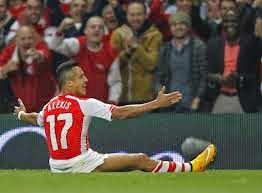 Tomas Rosicky and Lukas Podolski stank the place out on Tuesday evening. For the two most experienced players in the Arsenal side to be the the ones that let us down is extremely disappointing. With Rosicky it wasn't for lack of effort, but every time he went near the ball it ended up going wrong. Podolski simply looked disinterested throughout, and he missed the one chance he got on the end of by hitting the ball at the near post (I was right behind it and Forster had left a massive gap across goal). How either of them got through the 90 minutes is beyond me, but it tells you all you need to know about how Wenger carries out his substitutions. To take off Bellerin and put the dominant Oxlade-Chamberlain at full-back for the last five minutes was utterly ridiculous, and it meant that Akpom had no time at all to show what he could do up front.
There were a number of positives on the night, despite the defeat. I thought that Francis Coquelin was Arsenal's best player, even though he was playing out of position at left-back. He got caught out a couple of times early in the second-half, but his reading of the play and his physicality drove us forward time and again. I was sitting in the lower tier for the game (£10 for the ticket is a no-brainer really) and this meant I had a close-up view of Coquelin in the first-half. He was visibly frustrated with the ineffective Podolski and gave him a rocket on at least one occasion. That is really good to see from my point of view. I would have no hesitation in putting Coquelin in to the side at the moment, either in his own midfield position, or as the back-up option in either full-back role.
Isaac Hayden also had a fine game at centre-back but his lack of height would concern me. Having said that I can see no reason why he couldn't play the defensive midfield role. He is quick and strong, and brought the ball out of defence with great confidence. It was a very encouraging display from the youngster, but it remains to be seen how much faith Wenger really has in him.
In midfield Jack Wilshere was superb, but I have to pull him up on the way he failed to close down properly for Southampton's winning goal. As for turning his back on the shot he should be fined heavily - you get paid to get in the way of the ball, Jack. Aside from that he was the main driving force in the midfield and was superb. Alongside him was Abou Diaby and I thought he looked great on his return. It was refreshing to see an Arsenal player in the defensive midfield role who looked to get us going forward when he got the ball. It is clear that Arsene wants to use him there to save those wrecked leg joints and muscles, but can he be fit enough to play regularly? I was disappointed to see Wenger describe Diaby's display as "acceptable" as I thought it was so much more than that.
The other bright spot was Alexis Sanchez and that incredible free-kick. What a goal it was. Alexis now has four in five games and his work-rate is truly exceptional. Podolski should be utterly ashamed of himself when put alongside a guy like Alexis who is running himself in to the ground for the shirt. I'd like to see him taking his man on a bit more, rather than bringing the ball inside every time, but the start he has made at Arsenal is all that you'd want from a star signing.
David Ospina did not really cover himself in glory. For a debutant goalkeeper it was not an inspiring performance. He made a decent save shortly before we went 1-0 up, but he was woefully at fault for the winning goal. It was a great strike by Clyne, and it moved ever so slightly in flight, but it went in to the net right above Ospina who never got off the ground. His lack of height for a goalkeeper is disturbing and it was most evident when he stood on his line to face the penalty - the goal looked huge rather than the goalkeeper. His kicking was nothing short of a disaster and he made Szczesny look like Franz Beckenbauer when it comes to ball distribution. If Fabianski had put in a performance like Ospina's then the Arsenal fans would be crucifying him this week.
If there were was another disappointment the other night then it was Joel Campbell. I've been crying out for this lad to be given some sort of chance since he got here, but he failed badly to take it the other night. He didn't really look to take on his defender at any time. He worked hard enough, but the introduction of The Ox showed how easily beatable the full-back was. Campbell certainly justified the Manager's decision to continually leave him on the sidelines so far this season.
As I said above, I was sat downstairs for the game on Tuesday. This gave me a close-up view of Calum Chambers again. The thing I noticed more than anything was the way he fouls the centre-forward in every aerial challenge. Chambers' first move is to shove his opponent in the back with both hands. He kept doing it in the first-half and getting away with it. Early in the second-half he did it right in front of the referee who inexplicably ignored it. He will not keep getting away with fouling his centre-forward. As I wrote about from the Villa game, Chambers is going to cost us sooner rather than later unless someone at Arsenal gets hold of him. We certainly don't need it to happen this Saturday.
Posted by DvbrisG at Thursday, September 25, 2014