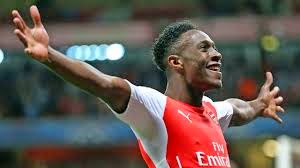 It's irrational to have such a vehement dislike for a club you'd only seen Arsenal play against on one occasion. But that is how I feel about Galatasaray. Last night, fourteen years on from my other acquaintance with them, merely served to underline why I despise them and their supporters. Scum doesn't even cover it. More on that below, but let's deal with the good stuff first.
I had a very small bet on Danny Welbeck to get the first goal last night. I just had a feeling that it was his game and he'd get among the scorers. My friend Gary went one further and bet on him getting a hat-trick! From start to finish he dominated this game of football. Regulars will know I've always been a fan of Welbeck and considered him a top player since he first came on the scene (honest). What I will say about him is that he is a far better footballer than I ever gave him credit for. He is strong, quicker than I thought, and has fine touch - all of which was evident last night, particularly for his second goal. The way he muscled past Melo, leaving the hard man of Galatasaray firmly on his backside, before racing away and slotting the ball in the left corner, while falling over as he finished, was Henry-esque. Now I'm not going to compare Danny Welbeck to Thierry Henry, but that goal was a carbon copy of Henry's trademark finish. It reminded me of Henry's fourth in the 5-0 demolition of Leeds at Highbury in 2004. By a similar token the hat-trick goal was an Ian Wright style finish, running off the last defender and flicking the ball over an advancing goalkeeper. Following the nervous looking profligacy in evidence at Dortmund it was a great performance all round from Welbeck. Being English already has him at an advantage with the supporters, and the way he lapped up his deserved celebration with the crowd at his third goal showed me he is a man very happy to be here. With the pace and movement of Alexis and Oxlade-Chamberlain on either side he was given great support and service throughout - long may it continue. If Welbeck's confidence isn't sky high going in to Sunday then it never will be. 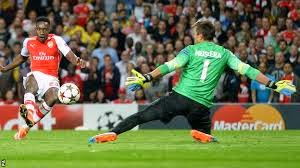 Thierry, is that you?

Aside from Welbeck there were great performances all over the field last night. The back four were exceptional, with special mention for both full-backs. Calum Chambers read the play brilliantly last night and made some great interceptions. Kieran Gibbs, meanwhile, showed why he is the best left-back in England. In midfield I thought Flamini was very much at his best and Ozil was more effective again, though on three of four occasions in the first-half he clearly saw players making runs in behind and chose not to play them the ball we're told is his speciality. Alexis was outstanding again, despite Felipe Melo doing all he could to break his leg. If the referee considered that foul worthy of just a yellow card then he isn't fit to officiate at any level. But Alexis isn't scared. He got up and destroyed the defence to get himself a goal (good ball from Ozil on that occasion). I just hope that the kick from Melo hasn't put him out of the Chelsea game on Sunday. David Ospina also made some confidence boosting stops when he came on, following on quickly from an unconvincing debut last week against Southampton.
It was a great performance from the players last night, by far our best of the season. I keep hearing that Galatasaray were awful and all that, and they were. But you can only beat what is put in front of you. They were bad, but they didn't have a chance to get going, so good was our display. The Arsenal team went out last night and destroyed their opponents. If it hadn't been for the red card I think we'd have comfortably scored another goal or two. For once we weren't sitting back and winding down and it was great to see. 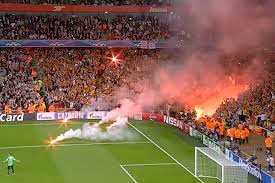 And so to the negative - the Galatasaray fans. I was outside The Armoury when their main support was escorted down Hornsey Road with their flares and firecrackers and their abuse for The Arsenal. Having watched that I am amazed that they were able to get so many of those fireworks in to the stadium. As usual, as I went through the turnstiles last night, my bag was searched by a steward. So who was searching the Turks? When Arsenal go to away games in Europe the supporters are individually searched. What happened outside the away end last night? Was anyone subjected to a search? And I don't blame the stewards for it. The Met Police should have been doing the searching, dressed in full riot gear, and making it clear that there would be no nonsense if it kicked off.
When the flares started being lit there was an influx of riot police who stood in front of the away section. If there was similar trouble being caused by away fans in Turkey (or just about anywhere else in European competition) the local police would have been steaming in. Why did the police not enter the away end with batons drawn to drag out those with the flares and firecrackers? I believe Sky managed to close in with their cameras on the perpetrators, so why couldn't the police do so?
I wasn't upset when an announcement was made in Turkish with about fifteen minutes to go. It was obvious they were telling the Galatasaray supporters that they were being locked in. That tells you how bad things were, and how concerned the police were - it's years since away fans have been locked in at Arsenal. When I was a kid it was normal on any match day for the opposition support to be kept behind, and I wouldn't complain about it making a welcome return at most fixtures these days. Last night it was imperative.
The fact is that the Galatasaray fans are scum. Murdering scum. Worse than that they are encouraged by the Club itself with all the "Welcome to Hell" nonsense that pervades their stadium. There was an idiot (not a young bloke) in the row in front of me who thought it was funny when the flares were being thrown on to the pitch. There was a posh bloke down by The Armoury who thought it was "wonderful" when they were coming down Hornsey Road. Clearly neither of these prats were in Copenhagen fourteen years ago. It was a delight to see Arsenal thrash them last night.
Posted by DvbrisG at Thursday, October 02, 2014