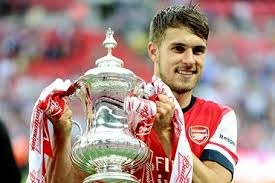 The main man at Arsenal this season

This will undoubtedly be the longest of the four parts of the annual squad review. Arsenal have a cast of thousands in midfield and I will be including the likes of Alex Oxlade-Chamberlain who is ridiculously listed as a forward on the Arsenal website.

Tomas Rosicky
Tommy ended up with nearly 40 appearances across the season, despite regularly suffering niggly injuries. I was surprised when his contract was extended, but it showed his wish to be an Arsenal player. When he has been involved Rosicky has often been a key man. His willingness to run at a defender creates space and makes things happen in games that are otherwise just passing us by. His season will largely be remembered for his two goals against Tottenham, one of them that incredible strike at White Hart Lane. His performance against them in the FA Cup when he replaced Ozil was massive and showed Tomas at his very best. He should have had himself a goal in the Cup Final with just about the last kick but was too unselfish, though his impact from the bench was instrumental in the win - how he enjoyed winning his first Arsenal trophy.

Mikel Arteta
Midway through this season Arteta's legs had gone. It was the most obvious example I'd ever seen of a player simply losing it and unable to cover the ground any more. I was amazed, then, at the way the FA Cup semi-final saw him get a second wind. His performances in both Wembley games were remarkable and he seemed to get stronger as they went on. He was my Man of the Match in the Cup Final. For most of the rest of the season Arteta frustrated me. He is generally unwilling to play a forward pass and I would lose count in any one game how many times he slowed us down unnecessarily. What he did well was lead the side in Vermaelen's absence and his selfless act of giving the Cup to the Belgian at Wembley will surely go down in Arsenal folklore.

Jack Wilshere
Not fit. Jack simply has still not recovered from his long lay off. He has benefited, in terms of the crowd reaction to his performances, from the treatment (unfair as it has turned out) that Aaron Ramsey got. The fact is that when he has played this season he has often been poor. Jack spends too much time rolling around on the floor whenever he is tackled and it is doing him no favours. He could really have done with a proper rest this Summer but he is now off to the World Cup, barring further injury. He scored the goal of the season (the best team goal I've ever seen) against Norwich but highlights were few and far between. Jack is in danger of not fulfilling his potential but, like Rosicky, his late impact in the Cup Final was massive in our winning of the game.

Mesut Ozil
Started brilliantly, tailed off in the middle, flickered briefly, disappeared altogether at Wembley. As a brief synopsis of Ozil's first season that just about covers it. The fact is that the £40m man has not lived up to his billing. Yes, he had quite a few assists, but generally he contributed little to our play. We are not such a good side that we can carry passengers and Flamini balling him out in the Bayern Munich game was long overdue. The biggest problem we have with Ozil is that he is frightened. That is something that I don't know can be changed. In the Premier League you have to be able and willing to take a hit. Ozil wants to go nowhere near physical contact and he simply isn't the player that destroyed England at the last World Cup. Will he get better in his second season? I'm not even sure he'll have a second season. His penalty miss against Bayern Munich was nothing short of an embarrassment. Signing him boosted the entire Club, but we need so much more from him.

Alex Oxlade-Chamberlain
It couldn't have started any worse for The Ox. He was dominating the game against Villa on day one only to get injured in a tackle and be missing for most of the season. When he came back we saw what we missed so much. In the absence of Theo Walcott Ox provided the pace that had been missing for so long. His powerful running was too much for many opponents, not least Bayern Munich and Tottenham. In the Cup semi-final he was head and shoulders above everyone else. The injury that ruled him out of the Cup Final was tragic for him having missed so long this season. Another who could really do with a break he now has to go to the World Cup instead. I doubt he will be ready to start next season.

Aaron Ramsey
What a revelation. I don't mind being proved wrong by Arsenal. Aaron Ramsey has proved many of us wrong this season. If you claim that you didn't, at the very least, have doubts about Ramsey then you are a liar. What he has done this season has been incredible. Another whose season was partly wrecked by injury, in truth his lay-off might have come at the right time for him (though we could have done without it being four months away from the team). Ramsey was at the heart of everything that was good about Arsenal. Olivier Giroud missed him more than anyone else in the side as he became incredibly isolated without the support he got when Ramsey was around. His goal in the Cup Final was a just reward for the most incredible season from central midfield and completed the long road back from having his leg smashed at Stoke. Now up there with Alan Sunderland and co as a legend of the Club for his Wembley heroics.

Santi Cazorla
The little Spaniard was moved to the wing upon the arrival of Mesut Ozil. It certainly stunted his contribution. Most Gooners were really excited to see him and Ozil in the same team when Santi returned to fitness. The sad fact is that they never really combined. There were still good moments for Cazorla and he started to show himself as a bit of a big game player in terms of his scoring - goals against Liverpool and Spurs were huge, and then came his incredible free-kick in the Cup Final. I predicted early on in the season that being moved away from his preferred position would see Cazorla leave before next season so it was a surprise to me when he extended his deal with us. We will now get the best years of Santi Cazorla's career and I hope he can kick on and see us to more trophies - though where he will play is a matter for speculation. Overall I was disappointed by him this season, but we'll always have Wembley.

Mathieu Flamini
On a free transfer at a time when we were short of his type of player the signing of Flamini was a no-brainer to me. His impact when he came on against Tottenham was immediate. We finally had someone in midfield who would communicate, direct and tackle. A walking yellow card he may be, but Flamini gives us the necessary bite we often miss. He seemed to be ostracised by Wenger after his tirade against Ozil and that was to our detriment. Flamini isn't the most talented "footballer" but as a member of a squad he is excellent and he is a leader. He also really enjoyed getting a winners medal.

Abou Diaby
I don't think many of us thought we'd ever see Diaby again. To have worked his way back from injury one more time is testament to his resolve and his career is one of the great tragedies - Diaby would have been a World star by now. If he is still around next season we still won't see much of him, I'm certain.

Kim Kallstrom
One of the weirdest signings Arsene has ever made. We were short in midfield with injuries, so Wenger signed a bloke with a broken back. You couldn't make it up. He made a couple of appearances and scored his penalty in the semi-final shootout - I would argue that scoring that spot-kick made his Arsenal career worthwhile in its own way.

Thomas Eisfeld
He hasn't kicked on as expected. Eisfeld got his first Arsenal goal in the League Cup at West Brom but that was the last time he was seen in the first-team until a surprise call-up to the bench against Wigan at Wembley. He did little in the under-21s this season either and his Arsenal future must be in doubt. When you watch him you realise that he's a bit "David Platt" in that, if he isn't scoring a goal there isn't really a lot going on.

Serge Gnabry
For some reason Arsene Wenger stopped putting him on the pitch, and then he was injured when it came to the business end of the season. Undoubtedly the best of the youngsters from the last couple of years he had massive impacts on the games at Swansea and Crystal Palace where his running at people provided what we were missing without Chamberlain. Quickly a fans favourite he also destroyed Tottenham in the FA Cup, setting up Cazorla's goal in that game. Gnabry looks the business and could play anywhere across midfield. His emergence was another reason to be surprised at Rosicky's contract extension, and I really hope to see much more of Serge next season.

Kristoffer Olsson
Made his debut impressively at West Brom in the League Cup after a similarly promising pre-season. Next season could well see him getting a loan somewhere, but maybe not until the League Cup campaign is over. Another good pre-season is important for him.

Gedion Zelalem
The star of the pre-season tour I think many of us expected to see Zelalem making a Fabregas-style impact this season. He got injured after being on the bench at Fulham early on and finally made his first-team bow as a sub against Coventry. He looked good again that night, but regular watchers of the youths and reserves are not impressed with him at all. It's fair to say he's gone backwards this season and may even have found himself overtaken by one or two others, something that was unthinkable when he was named in the official first-team squad back in August.

Emmanuel Frimpong
He was actually named on the bench on five occasions at the start of the season. The fact that he couldn't get near the pitch despite the sparse squad at that time tells you all you need to know. Eventually transferred to Barnsley in January, he was then released by The Tykes at the end of the season (he was sent off on his debut). Not Dench.

Nico Yennaris
Nico made the bench at West Brom in the League Cup, but was obviously now further than ever down the pecking order. I still think he could have been a useful squad back-up in midfield and at full-back, if only given the opportunity. Sold to Brentford in January and doing pretty well.