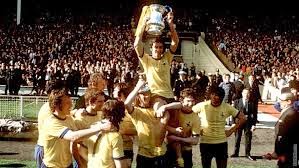 I toyed with the idea of writing a retrospective on the last day at Highbury today as it's the anniversary of the final game there. I've decided that I'll save that for a while and maybe mark it at the ten year point. Also you're going to be getting lots of old stories over the next ten days, more of which at the bottom of this post.

I've already reached the point where the excitement has built up too much ahead of the FA Cup Final. With the 4th place trophy already secured there is only one thing to concentrate on and last night I couldn't sleep from thinking about Wembley. God knows how I'm going to be by the night before the game. The tickets arrived today so that's going to make the anticipation even higher. It seems, however, that Arsenal Football Club are not quite so excited as the supporters might be.
Before the Newcastle game I had a walk around the stalls outside the ground. I always buy a Wembley t-shirt when we get to a Cup Final and I wanted to see what the vendors had on offer. As it happens there wasn't that much of a selection. To be honest there was a general lack of Wembley gear to be had. But what little there was still outweighed what I found in the official Arsenal outlets. The Club had literally nothing on sale for Wembley.
Having walked all round the All Arsenal Store (The Armoury had been closed for renovation with two home games still to be played - only at Arsenal) I asked one of the lads working there if there was anything for the Cup Final. He explained that, due to The Armoury being closed, they had all the stock from the other shop in there. My answer was "And...?" The Arsenal employee then told me that they were hoping to get in "some stuff next week". Given that the final home game was being played on Sunday this just about summed up the commercial strategy (or lack of one) at Arsenal Football Club.
I've looked at the Arsenal website just now and there is still no merchandise on offer for the FA Cup Final. Just think of the money that the Club is missing out on here. What would the "Worldwide fan base" be willing to part with for a piece of the FA Cup fever that they can only see from afar? Figures released a couple of months back show that Arsenal are lagging behind Manchester City, Spurs and co in commercial revenue income. I can fully understand making less than Manchester United and, maybe, Liverpool. But for Arsenal to be making less money on branded tat than Tottenham, City and Chelsea is unacceptable. In such circumstances an FA Cup Final should be a licence to print money. You really have to question what Ivan Gazidis and his various minions are paid for. With a sporting juggernaut the size of Arsenal a gang of trained chimpanzees could run the business better. Who knows, if commercial revenue was at the level it should be they might not have had to put ticket prices up by 3%. But then again...

I've deliberately used pictures from 1971 and 1979 on this post as they will be forming no part of the series that will start on the site at the end of this week. The Norwich match rather gets in the way of the original plan but, starting on Friday, I'll be posting my recollections of the FA Cup Finals I've seen us win. Given as how I was born two weeks before the 1979 Final I can't really comment on that day. So, Friday I will post a piece I've written on the two games from 1993. The weekend will be concentrated on the last Premier League game of the season (if I get to write anything over those two days - work may well get in the way), then on Monday it will be 1998, Tuesday will be 2002, Wednesday will be 2003 and Thursday 2005. The night before the Final I will be writing a special preview ahead of the big day. As I said at the top, I'm already at the sleepless night stage. Still ten days to go.
Posted by DvbrisG at Wednesday, May 07, 2014