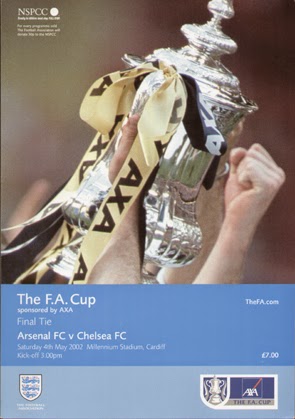 
Having travelled to Cardiff on the train from Paddington in 2001 we decided to take a minibus from Dover for the Chelsea game in 2002. The previous year had seen a magnificent day in the Cardiff sunshine spoiled by Steve Dunn’s deliberate act of stopping Arsenal from winning the FA Cup (just check the video from that match and tell me there isn’t something fishy about a referee who seemed to make it his personal quest to upset Dennis Bergkamp). The highlight of that train journey the previous year had been at Reading station where a train full of Arsenal supporters spied a train spotter in a Tottenham shirt at the end of the platform – we were the first train of the day and it absolutely erupted once this cretin had been seen.
Back to May 2002 and we set off on the afternoon before the game after a quick drink at The Boar’s Head. The fun bus, bedecked in its red and white ribbons, was packed with beer and crisps and brandy and Dover Gooners – there was me, my Dad, my brothers, Bill, Gary, David, Frank and Tony, with Scott, a Newcastle fan, doing the driving for us. The singing was good (or largely out of tune) and we made good time all the way to Bracknell where I insisted on an impromptu pee stop by the side of the road. Having been abused mercilessly for curtailing the progress I was amazed to see every other sod also get off the bus to relieve their aching bladders.
Having stopped on the M4 for diesel and a small (!) brandy coffee we eventually got to our hotel in Chepstow around tea-time. A quick change of clothes and we headed off up the hill to join Frank Stubbs and the Maidstone Gooners for a night of good food and drink to prepare for what lay ahead the following day. 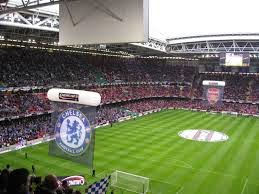 Pre-match in a magnificent stadium

We were all up early the following morning for a cooked breakfast, and some more brandy. We were “joined” by a family of Chelsea supporters who I don’t think were regulars at the Shed back in the 80’s. Gary offered them some brandy to usher in the day only to be told in a very plummy accent “We do our celebrating after the game”. Naturally they were told to expect a very sober day in that case. Off in to the bus again and we were in Cardiff early doors. After a quick walk around, and meeting Peter Nicholas briefly, we settled in front of Cardiff Castle with the remaining beers to enjoy the Cardiff weather and hospitality once again. 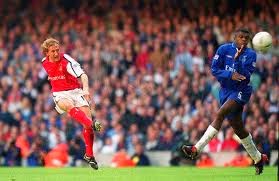 It's only...you know the rest

Having got in to the ground nice and early I once again marvelled at the Millenium Stadium. It is one of my favourite grounds that I’ve ever been to. Our seats were high up in the top tier, about the edge of the penalty area at the end we scored both goals, opposite the tunnel. I can remember the usual business of each Club getting to hear from their usual PA announcer before a song was played for a bit of a sing-along. This was the season of Freddie, of course, and the song played for us was “Can’t Take My Eyes Off You” by Andy Williams. The song seemed to float across the sea of flags that was now in the Arsenal end and the singing of our version of the chorus was loud. 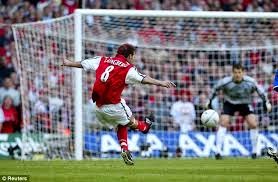 We love you Freddie...

I don’t recall too much of the first-half, save for a Bergkamp header that floated just over the top. We were all pretty relieved when Jimmy Floyd-Hasselbaink had to be replaced as his hamstring injury hadn’t really healed properly and he was never fit in the first place. Two minutes later Ray Parlour let fly with that shot. What a celebration. It was the usual scene of jumping and shouting and flag waving joy. We seemed to have them on the rack and Thierry Henry and Ashley Cole seemed to tear Chelsea apart down our left. Following what had happened twelve months ago each missed chance had us more and more worried. Then Freddie went down the left and left John Terry on his back side. When he curled that ball you just knew it was going in. You also knew we’d won the FA Cup. One of my abiding memories is of watching the replay on the big screen and seeing Lee Dixon, warming up behind the goal, take off in celebration in front of the Arsenal fans.
Within a minute Henry was replaced by Kanu and my brother immediately pointed to the slumped shoulders of the Chelsea players – they were still petrified by the Nigerian after his hat-trick at Stamford Bridge three years earlier – and they simply couldn’t get the ball off him in those last ten minutes. The rest of the game is a blur, and I don’t really recall the trophy presentation. 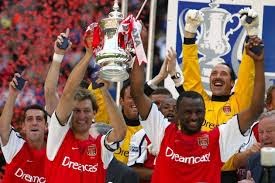 I do remember vividly parts of the lap of honour. Most of all I remember Ashley Cole coming back out of the tunnel with the Cup and running to our end because we were all still in the stadium. The reason we were all still there was because Lee Dixon hadn’t left the pitch yet. He stood there in the centre-circle just looking at the Arsenal supporters, dancing away to the songs, determined to take in everything on what would be the last time he would be around such an occasion as a player. The only shame was the chanting of his name was being drowned out by yet another oppressive PA system. 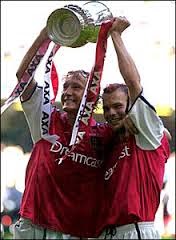 The walk back to the minibus was fantastic. Arsenal everywhere, singing Sol Campbell songs and Freddie Ljungberg songs and Arsene Wenger songs. Fantastic. Back on the bus it was more of the same. We drove out of Cardiff with the sliding door cracked open and me and Gary hanging out of it singing “We love you Freddie” to everyone on the pavements and in the cars. Magnificent memories if, looking back at it, a little bit stupid in safety terms! 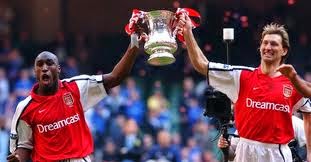 The frivolity did stop on the M4 when, in the traffic jam, we found the bus (with door shut) the object of hostility from a similar vehicle containing the more thuggish elements of the Chelsea support (I should mention that three of our group were over 60 years old). By now a couple of us were dying for a pee again but we couldn’t stop because of these nutters. When they pulled off in to the services we piled out on to the hard shoulder – our driver Scott, an ex-Royal Marine, was also out of the bus but he wasn’t stopping to relieve himself so much as to look for the Chelsea fans! 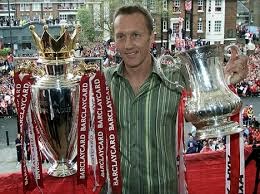 Dicko with the spoils of the season

We made it back to Dover safe and extremely happy at the end of a long and fantastic couple of days. The first part of another Double was in the bag, but I wasn’t able to go to Old Trafford the following Wednesday (unlike most of the others) as I was in the middle of a four week training course. What a week to be a Gooner.