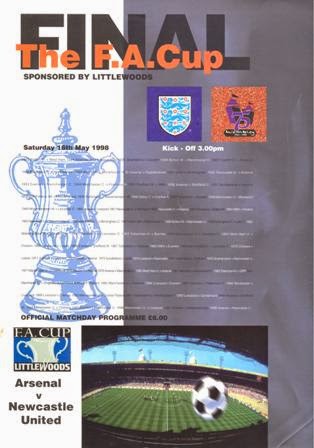 
Two weeks before the 1998 FA Cup Final Arsenal had already won the Premier League. I’d been to the games at Anfield and Villa Park that followed the win over Everton but they’d been absolute non-events. The players and the supporters were already focused on Wembley and the chance to replicate the greatest achievement in the history of the Club. Throughout my childhood my Dad had told us all about “The Double Year”. To be honest it was completely mythical to someone of 19 years-old and something that I never considered I would ever see Arsenal do. 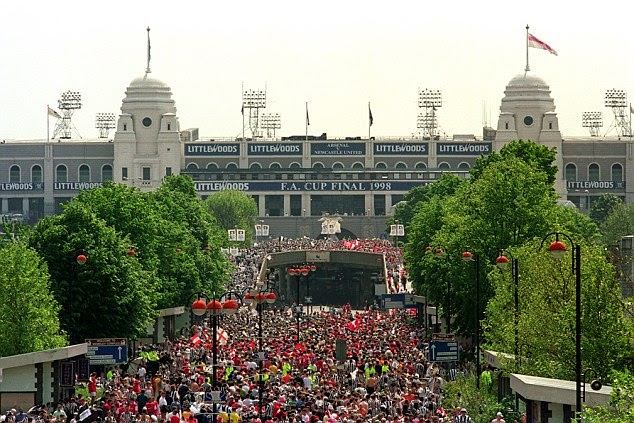 The most exciting view in football

May 16th 1998 was very hot. It really was what you might call typical Cup Final weather. The black and white of Newcastle, against the red and white of the Arsenal supporters provided as good a visual spectacle as we’d experienced five years earlier against Sheffield Wednesday. For some reason we didn’t go to the other end of the stadium this time to see the teams arrive. Instead we went and found our seats good and early. We were up behind the goal, a fair distance back, but right next to the exit on the end of a row. Basically it was as good a view of the pitch as you could get at Wembley in those days. On the way in I’d bought myself a new flag (my Wembley flag from Luton in 1988 had started to show the effects of age and being flown from a car window in 1993) and it was a big red beast with a yellow cannon on it – I still have it to this day. That flag would get some serious action that day.
Tony Hadley sang the national anthem before the game and was met with loud cheers from our end as a famous Gooner. I suppose plenty was already going our way. When the game started Arsenal were quickly in control and Ray Parlour was setting about Stuart Pearce in a big way down our right. He laid one on a plate for Nicolas Anelka but the youngster headed over the open goal he’d been presented with. Aside from that Anelka’s pace was far too much for Newcastle’s Dad’s Army side. A midfield including David Batty was never going to be a match for Vieira, Petit, Overmars and Parlour, while Christopher Wreh’s non-stop running was slowly wearing out Howey and Dabizas. 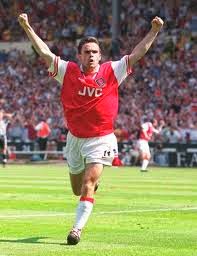 It was a matter of time really before we got the first goal and Overmars was the man who did it, right in front of us Gooners. Again it was a mad celebration. We continued to dominate the first-half though chances were not too clear cut. Shearer was getting more and more frustrated and elbowy up front for them and just before half-time he mowed down Tony Adams in the corner of the pitch. TA6 got up and laughed at him, Shearer got booked (he should have walked if truth be told) and the Arsenal fans launched in to “One England Captain” to serenade the bitter idiot – remember Shearer was only playing after he blackmailed the FA in to not suspending him for kicking Neil Lennon in the head two weeks earlier by threatening to not play at the World Cup. 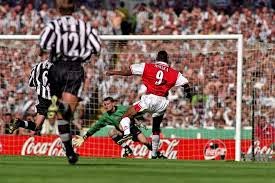 I can still see this clearly

Half-time came and went and Arsenal were comfortable. In the ten minutes or so after the break it was apparent that we were too comfortable. First of all Dabizas looped a header on to the bar and then Shearer capitalised on a stumble by Keown to hit the post. This roused us lot behind the goal and I recall clearly being one of the first off my seat to scream  “COME ON!!!” at the players. The noise level rose from us supporters as we could see the players starting to throw away their clear superiority. That was the end for Newcastle, as it happened. Ray Parlour and Lee Dixon down Arsenal’s right started to dominate the game completely, and David Platt came on to play the supporting role to Anelka (as well as kicking anything that threatened to move). When Parlour lobbed the ball over the defence and we saw Anelka charge clear we all looked to the linesman. From my seat I had the perfect view of Anelka’s shot and I could see it was in long before it hit the net. We knew then that we were going to win the Double. Again there was jumping about and deafening noise and cuddling people and going mental. 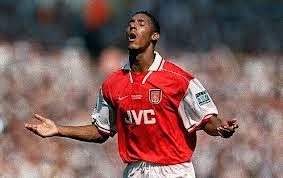 Parlour simply got stronger and stronger in the oppressive heat. He hit the post late on after a storming run past most of their defence and Overmars was about six inches away from scoring with a 40 yard volley that Shay Given just about climbed for and clung on to. On the one occasion Newcastle got in late on Nigel Winterburn came from nowhere to make one of the great Cup Final tackles as Shearer drew his foot back to score. Standing ovation for Nutty Nige. Then Gilles Grimandi appeared on the touchline, stripped for action. A lot of us were bit incredulous at this as Ian Wright and Steve Bould were also among the subs. The ball subsequently didn’t go out of play before the end of the game – I suspect an Arsenal player would have booted it out had one or both of the others been getting their deserved taste of the Cup Final.
The final whistle brought delirium in the Arsenal end.  As I said, it was something I never thought I’d ever see. I’m sure all of us youngsters were the same. For people like my Dad who’d been there in 1971 he’d been one of the few to witness both. I cried at Wembley after the game ended – we’d done the Double! 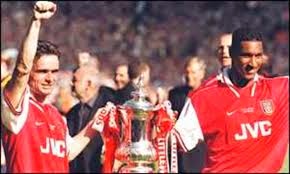 Scorers with the Cup

I don’t really recall a lot more from inside Wembley after the game. I do remember the PA blaring out “Walking On Sunshine” and the Arsenal fans singing along to every word while the players dances in front of us. Wrighty tried to orchestrate one of those run and dive things that the Chelsea players had done the year before, but thankfully most of the others weren’t up for copying those no marks. I also remember him planting an Arsenal flag on the centre-spot and him and Lee Dixon sitting in the centre-circle with the Cup for a while. We all filed away eventually.
Walking back to the car there were a lot of very gracious Geordie fans (the older ones at least) who were applauding the Arsenal fans and telling us we had the best side in the World. I’ll never forget that. Lots of them were shaking hands with us as we all walked back to our cars or to the station. Then, outside The Torch pub a couple of them put their hands out to shake, only to pull them away and tell us to “f***-off”. It was a shame as the vast majority of the Newcastle fans had been great that day. And, yes, they did get a mouthful back.
The car journey back through North London was like nothing I’ve ever experienced and never will again. It goes without saying that the traffic was horrendous, but that doesn’t matter when you’ve won, does it? Coming through Archway there were, randomly, a load of Newcastle fans outside a pub opposite the station. What you thought might be ugly was nothing of the sort as they raised their glasses to the Arsenal procession back to Highbury. In the traffic jam in front of us was a limo from which emerged through the sunroof the comedian Alan Davies, beer in hand and smile on face. There were literally Arsenal songs being sung in the traffic jam. Behind us, meanwhile, was a luxury coach. It was me who noticed that, sitting in the seat at the front of it, was Charlie George – this was one of the Arsenal staff coaches. In the stationary traffic my brother got out of the car and knelt in front of the coach to bow before a beaming Charlie.
From the bottom end of Archway Road, all the way to Highbury Corner, it was like being in a carnival. There were hundreds (probably thousands) of people on the streets greeting us all back from Wembley like some kind of returning war heroes. People were leaning in to the cars and hugging us and shaking our hands and there was more singing and car horns blowing. Quite simply it was the most amazing scene. All the buildings seemed to have Arsenal flags on them that hadn’t been there earlier in the day. What a feast for the senses.

You never want that sort of thing to end and I’d love to do it all again. Sadly I don’t think I’ll ever have a better day at football than 16th May 1998 – glorious and memorable in every way you could imagine, but if I do then it will be well worth it!
Posted by DvbrisG at Monday, May 12, 2014