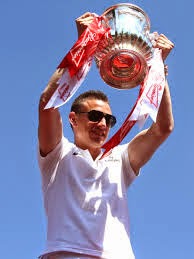 It seems ridiculous that a defence that conceded over 40 goals again this season and, more particularly, let in six on two occasions and five on another is about to get some serious praise from me. The fact is that the games at Liverpool, Man City, Chelsea and Everton account for nigh on 50% of all the goals conceded in the Premier League by Arsenal. The other 34 games saw the defence looking pretty good. Add in a very decent European campaign at the back and the fine FA Cup run and it doesn't add up to too bad a season for the men at the back.

Bacary Sagna
So it's turned out to be Bac's final season as an Arsenal player. He's been outstanding in his time here, but his decision to turn down a new contract leaves a little bit of a bitter taste for me. He is a player in his 30's who has suffered two broken legs in recent years. I would say that the offer of an improved two year deal, with the chance of a third year option was more than fair. If he chooses to take his leave and goes abroad then I wish him luck. If he chooses, as expected, to go to Manchester City then I say with certainty that he is leaving for the money - does he really think he'll get a game ahead of Zabaleta?
In terms of his season at Arsenal I thought Bac had a decent time. His crossing was as bad as ever, but his defending as excellent as ever. I still believe he could have had a longer future at the Club with a move to centre-back, such is his superb aerial ability, and his unsurpassed stamina. It's nice that his service has finally been rewarded with a trophy and he enjoyed winning the FA Cup as much as any of the other players last week. Thanks Bac, but please don't go to another English side. 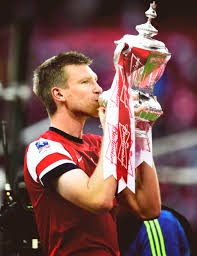 Per Mertesacker
The BFG has become THE cult hero of this Arsenal squad. Seen by many fans as the genuine leader of the group it will be a surprise if he is not appointed Captain for next season. Here is a man that was written off by the TV "experts" because he is slow across the ground. What they were choosing not to see of course was his ability to read the play unfolding in front of him. Per so often takes a step forward on to the ball as it is played in behind and takes control of the football. I read a stat that he has never yet given away a ball in the final third that leads to an opposition shot at goal (until last Saturday I suppose!)
If there is a criticism of Mertesacker it is that he doesn't use his height appropriately. There have been plenty of occasions this season when that might have been true. However, when he does use his height he can be utterly dominant. He has been the organiser in the defence, and very much the man that the others take their lead from. He has developed a genuine friendship with Laurent Koscielny and this shows in the way they play to one-another's strengths on the pitch. To me he is a superb player in his own way. He's not quick, he's not dynamic, but he is a tremendous footballer with a touch belying his awkward looking height. He also pops up with important goals from time to time, just like he did in the semi-final.

Thomas Vermaelen
Having been appointed Captain of Arsenal Football Club it must be disappointing to a proud man like Vermaelen that he is really skipper in name only. The likes of Arteta and Mertesacker have been keen to talk up his role in the dressing room all season and we must take them at face value on that. It is a sign of the esteem he is held in that Arteta wanted him to take the FA Cup last Saturday as Captain.
When Vermaelen has played this season he's generally done quite well. Perhaps he has been more focused on actually defending as his positional discipline has been better. With the successful partnership of Mertesacker and Koscielny firmly ahead of him The Verminator was only ever going to get in to the side this season through injury or suspension. As a result he appeared on only 20 occasions in all competitions, often as a late sub. For me he put in one or two of his best displays while covering at left-back. The home match with West Ham was where he looked at his best, both as skipper and player, and I would rather see him covering for Gibbs than Nacho Monreal.
One thing that Vermaelen does better as Captain than either Mertesacker or Arteta is to get himself known to the referee. Too often, particularly in games where our players are getting a bit of a kicking, our on-pitch skipper can be slow to complain. Vermaelen will talk to the referee, however. He is also the one who will get in there quick at any flash point in a game and make it clear that anyone wanting to kick his players will have him to mess with too. I wonder if he'll still be around in August?

Laurent Koscielny
One of the best defenders in Europe as far as I'm concerned. His weakness is that he has the habit of making needless challenges in his own penalty area which often lead to opposition penalties (and he also got away with at least one of them this season). His strengths are his pace, which is the perfect antidote when covering in behind Mertesacker, his tackling and his scoring of crucial goals.
I christened him King Koscielny last May after he scored the goal that put us in the Champions League for the second year running. This year he was up to last day heroics in the opposition six-yard box again with his goal in the Cup Final. The scoring of crucial goals is a nice habit to get in to for any player.
The defence looks so much better with Koscielny in it. His speed and tackling is massive for this team. Somehow he seems to be under rated by the media and he is never mentioned when it comes to talking about the top centre-halves in the Premier League. He also isn't an automatic choice for France. I can see him having a stormer of a World Cup given the opportunity and the capturing of King Kos on a long contract in April may yet end up our most important signing of the year.


Nacho Monreal
At the start of the season I got the impression that Arsene Wenger wasn't sure who his best left-back was. As we've gone on there can be no doubt, and it certainly isn't Nacho. Monreal lacks pace and is regularly out of position. I wasn't surprised that he was left out of the Spain squad for the World Cup, even though he's been there throughout the qualifying.
Monreal's best performances this season have been on the left side of midfield when he's come on late to help protect his full-back. The regular injuries to Kieran Gibbs have seen him play more often than was good for us, to be honest, and he's also had his own issues. I was disappointed to see him among the subs at Wembley last week ahead of Carl Jenkinson, as I really don't know why you would ever need both Nacho and Vermaelen on the bench. It will be interesting to see if Monreal stays on next year, knowing he'll only play when Gibbo isn't around.

There was a time in the previous season when Jenko had shown the sort of potential that might have seen him become first-choice. Frankly, Sagna shouldn't have been brought back in at the time. This season he hasn't seen anything like as much action as he would have liked. However, aside from an aberration against Chelsea in the League Cup he hasn't let us down.
With England's weakness at right-back I consider him unlucky not to have got a call-up in some ways, despite his lack of games this term. When he does play he always gives it everything (he is one of us, after all) and is far more dangerous going forward than Sagna - his cross for Nicklas Bendtner's goal at home to Hull was probably the best from any Arsenal player all season. As I said above I felt sorry for him last Saturday that he appeared to be the "19th man" in the squad. Still, he'll almost certainly be awarded a Cup winners medal and deservedly so, and who could forget his celebration of his first Arsenal goal at Norwich?
I don't know if he'll be given the opportunity to replace Sagna next season, but I certainly don't subscribe to the idea that he needs a loan. What the lad needs is a run in the side, as he got last season, and he might just establish himself for Arsenal and England. The Coropral continues to live all of our dreams.

It is a disgrace that this lad is not going to the World Cup. Yes, he can be injury prone. But he has shown incredible improvement in the last two years. Unlike the others who are actually in the England squad he can also defend, rather than catch the eye going forward. Also unlike Baines and Shaw and Flanagan he has played in the Champions League against the very best and not been found wanting.
In the FA Cup semi-final we looked so much better when Gibbs came on. Both defensively and going forward his was the introduction that allowed us to dominate the remainder of the game. Last week he missed the chance to write himself in to legend with the winning goal, but his display was largely faultless. Gibbo has come through the ranks and it shows in the way he plays and in the way he reacted to the win - his tears at the final whistle were mirrored thousands of times over on the terraces.
Gibbo could maybe add some attacking quality to his play - as a former winger his crossing can be abysmal. But he is young and has plenty of time to develop his play. Ultimately I want a defender to defend, and he does that as well as anyone.

The young right-back made his only first team appearance in midfield as a sub in the League Cup tie at West Brom. He certainly impressed that evening and might consider himself unlucky not to have had one or two more opportunities. He did make the bench for four Premier League games towards the end of the season but there was no real prospect of him entering the fray.

Another defender who made his bow in midfield at West Brom. He is the leader of the U21 side and usually plays at centre-back. In the Carling Cup tie he was deployed alongside Mikel Arteta in front of the back four and was lucky not to be sent-off, which is something of a feature of his game it would seem. He would make the bench on a few more occasions across the season but didn't take to the pitch. He has been retained for one more year and it will be make or break for him - look out for him being sent on loan before the season starts. 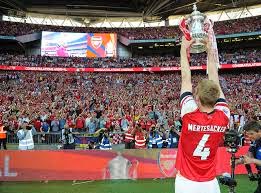