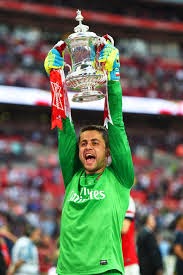 Finishing on a high

With it now being the quiet period of the year I have the chance to reflect on the players that have been involved in the match day Arsenal squads throughout this season. As is traditional I'll start with the goalkeepers.

The younger of our Pole's has cemented his position as the undisputed number one this season. He has improved just about every facet of his game. Yes, he is still prone to make the odd gaffe, but they are becoming more and more rare. The most encouraging thing about Szczesny this season is the way he has started to command his penalty area so much more. It is harsh on him that he has been involved in the games where we conceded so many goals at Manchester City, Liverpool and Chelsea - he was entirely blameless in all of them.
There has been a slight return of the arrogance that was a feature of Szczesny in his early years, but maybe that's to be expected if you want to be a top goalkeeper. He revels in winding up the Tottenham fans which is always likely to endear him to Gooners. Despite all of that, it was a mark of his professionalism and team mentality that he didn't sulk at being overlooked for the two games at Wembley. At the same time I'm sure he benefited from the genuine competition there was around him this season.

It was a surprise to me that he was still here at the start of the season. It was also a surprise that he remained second in the pecking order. When called upon Fabianski more than justified his selection. Over the last few years he has been particularly unlucky with injuries just as he had been looking set to get a run in the side.
I don't think there is too much to choose between our Polish goalkeepers but I would have to say that Lukasz was still one error away from calamity when he did play. How different might things have turned out had Agger scored a Liverpool equaliser in the FA Cup, or his two Almunia death runs had resulted in goals in the semi-final and final?
It was certainly a just reward for a player who has kept his head down and tried hard that Fabianski should end up a Wembley hero in the penalty shoot-out win over Wigan. Without his saves that day we wouldn't have been in the FA Cup Final in the first place. I was surprised that Wenger gave him the nod last week, but you couldn't argue against him deserving the opportunity after his heroics. Fabianski's obvious joy at winning a trophy showed that he "got" Arsenal and the supporters in a big way. He will now certainly leave us, and probably go on to do very well elsewhere, and I wish him all the very best.

The addition of an Italian international goalkeeper was a big boost to the squad, on paper. I do wonder what Viviano was told before agreeing to join, however. Surely he wasn't under the impression that his only appearance all season would be in a hammering for the U21 side.
It would appear from last week that he was a popular member of the squad and he seemed to thoroughly enjoy the Wembley experience. I was particularly amused by the story that he bid for the chance to play on the pitch at Ashburton Grove at the Arsenal Charity Ball, showing he has a fine sense of humour. I wouldn't be overly surprised if he was to be signed permanently to replace Fabianski, but it seems more likely that his future will lie back in Italy as he tries to get his place back in the national squad.

Next up will be the plethora of defenders used this season.
Posted by DvbrisG at Friday, May 23, 2014