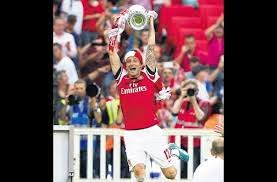 He can't do it alone

This is the final instalment of the squad review for 2013-2014. If nothing else it will give you a break from listening to the made up stories of how close/far away Arsenal are from doing a deal for Cesc Fabregas.

Lukas Podolski
He was left out of the first couple of games (he came on in the 91st minute against Villa on the opening day and was put at left-back) but made his bow at Fulham and scored twice in an impressive win in the pouring rain. Sadly he was injured thereafter and we next saw Podolski as Christmas arrived. The goals he has in his boots are undoubted - just look at how his presence turned the game on Boxing Day at West Ham. The perceived problem is that Podolski doesn't do much else and is too often missing. My view is that Arsenal don't get the best out of his game. Like most I was speechless at his substitution in both Wembley games, but it all worked out in the end. Podolski is a real character and seems incredibly popular with the other players. I think it would be a bad thing for Arsenal if he wasn't around next season - just look at the number of goals he gets compared to the minutes he actually spends on the pitch.

Olivier Giroud
Arsenal's very own Lone Ranger up front. Sadly the injury to Aaron Ramsey stunted his effectiveness in Arsenal's system, though maybe that exposed the paucity of Arsene Wenger's tactics as much as it did any deficiencies in Giroud's game. Most of the time this season he showed himself a very useful battering ram up front, strong and possessing a good touch. He was largely excellent with his back to goal, with the notable exception of the games at Stoke and the Cup Final where he spent most of his time allowing himself to be pushed around. The weakness in his game remains his finishing - he still misses the big chance more often than not and that is costly when you want to beat the top sides. However, 20+ goals is not the return of a bad player. Giroud would be a fine second choice in the Arsenal system, and would have looked far better had Arsenal played two up front in Ramsey's absence (just look at how much better Giroud was when Sanogo came on against Hull). He'll be around next season, but I hope he's largely making his impact from the bench.

Theo Walcott
Another season wrecked by injury for Theo. Ozil's debut at Sunderland gave us an idea of what he might produce with a pacy forward making runs behind a defender. When Walcott got fit around Christmas he came in to his own and was just rediscovering his best form when he knackered his knee. For me Theo's display in the Cup tie with Tottenham was his best in an Arsenal shirt. We need to hope that his knee injury doesn't rob him of any of his speed - without it he has nothing.

Yaya Sanogo
No goals. I know he was missing until a long way in to the season, but he's paid to score goals and he hasn't often looked like getting close to doing so. What Sanogo is for defenders is a nuisance. His height and his speed across the ground make him awkward. The only thing more awkward is his own touch at times and he seems often to be unable to sort out his feet. To his credit he helped turn the FA Cup Final on its head with his energy and effort. He was also unlucky to see a couple of efforts well saved by McGregor. I'm not convinced how long he'll be here for. Pre-season might be crucial for his Arsenal future.

Nicklas Bendtner
It probably says it all about our pitiful striker situation that he remained an Arsenal player this season. In fairness to him he got his head down and worked and scored two very important goals against Hull and Cardiff. It was typical for Nick that, having got the late goal against Cardiff, he injured himself in doing so and didn't get the chance to receive the acclaim of the supporters. One thing that can't be doubted with Bendtner is his bottle, stepping up to take a penalty at West Brom and scoring it on his playing return. Of course, when he didn't look so good he was quickly climbed on by the crowd and, when Sanogo replaced him, he went in to a familiar off-field meltdown. Having now finally been released I'll be interested to see where he ends up - I'm convinced most of his problems stem from the pushing of his father who is also his agent.

Ryo Miyaichi
He had a few games this season but the highlight for him actually came before we got started when he was allowed to take a penalty in Japan. Ultimately Ryo hasn't been good enough to play at Arsenal, a calculated gamble that hasn't quite worked out. Some you win, some you lose. If he's here next season then it's only because nobody wants to sign him.

Chuba Akpom
Having enjoyed an outstanding pre-season Akpom made his debut as a sub, playing out wide, against West Brom in the League Cup. He was very impressive that night with his pace causing all sorts of problems. He was loaned to Coventry but that didn't quite work out as planned. On his return to Arsenal he scored goals for fun in the youths and U21s. From what I've seen of him I'm at a loss as to why Sanogo is considered as being ahead of him at this stage. You can only get goals at the level you're allowed to play and Akpom did that superbly towards the end of the season. Another loan looks likely next season.

Alex Iwobi
Made the bench at West Brom in the League Cup but didn't get to put in an appearance. Another youngster who might find himself on loan at some point next season.
Posted by DvbrisG at Monday, June 02, 2014