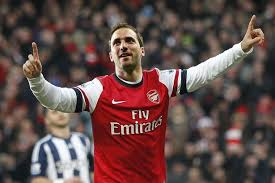 How things were meant to be

Gonzalo Higuain plays his second game against Arsenal tomorrow since he was supposed to have signed for us in the early part of the Summer. There is no doubt in my mind that Higuain (or a different World Class striker) is the missing piece in Arsenal's jigsaw at the moment, if only for the extra quality, cover and competition that he would provide in that area of the squad. That Higuain is playing for Napoli is a failure of Arsenal to get business done when they should have. I don't care that Real Madrid might have moved the goalposts late on, because that's business. The fact is that any agreement Arsenal might have thought they had with Madrid is not worth anything unless it's signed, sealed and delivered. I'm certain that Higuain was keen to play for us, and that agreement was in place with him and his people. I hope he doesn't come back to haunt us tomorrow night. We've already drawn 2-2 in pre-season with his new side, but tomorrow it's an altogether more important fixture. I also hope that there's none of the ridiculous pantomime booing of Higuain that was heard from the pre-season football tourists at the Emirates Cup.
Tomas Rosicky is back in the squad tomorrow, just in time to allow him to go off and play for the Czech Republic again in a couple of weeks from now. It's a welcome return of experience to the squad and no little quality. When Rosicky is available he usually seems to play from the start, and if that happens tomorrow it will be either Jack Wilshere or Serge Gnabry that drop to the bench. Ju Young Park also trained with the squad again today, but I'd be amazed if that's any more than a shirt selling exercise (Champions League training is open to the press). Any other changes would, I think, be unlikely.
Following the win in Marseille a couple of weeks ago we now go in to home matches knowing that we can win this group. Napoli and Dortmund are both hanging around at the top of their national leagues, just like Arsenal, but there is nothing for us to fear. As with other years we need to take as many points as possible from our home games. With three points in the bag from our first away game we are already off an running. If any side in the Champions League gets to ten points and still doesn't go through they can consider themselves unlucky. A win tomorrow night and we're more than half way there. If I have a concern it's that Rafael Benitez is the boss at Napoli. His record in European competition is exceptional, including last seasons UEFA Cup win with Chelsea. He has the tactical plans to beat Arsene Wenger's teams, and has done so in the past. In truth I might be happy with a draw tomorrow, but the need to win those home matches might overtake that once we get started. It's another big game, and we can't keep winning them all. Can we?
Posted by DvbrisG at Monday, September 30, 2013