A sense of belief 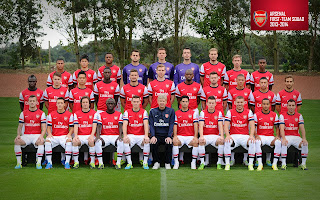 This lot are getting a response from us lot

It was a truly brilliant display from Arsenal on Tuesday evening against Napoli. We'd been told by certain pundits throughout our recent run that we hadn't had to beat any top teams. Of course, that's a nonsense argument - you can only beat what's in front of you and Arsenal have been doing that ever since we lost to Villa on day one. However, if you were the sort of person to go along with the rubbish in the media then after Tuesday there could be no more argument. We were playing against the team who beat last years runners-up in the European Cup a fortnight ago. We were playing against a team that is riding high in Serie A. We were playing against a team who had poached Gonzalo Higuain from right under our noses. In this group of death Napoli were to be feared. For Arsenal to go out on the pitch and simply blow them away with some, at times, breathtaking attacking football was a real sign that things are looking up. I've read one or two who have said that Napoli played poorly, but that's nonsense. The fact is that Arsenal's quality did not allow Napoli to play. To denigrate Arsenal any further at this stage is cretinous.
I was a bit surprised at Arsene Wenger's strangely unguarded reaction to questions about Mesut Ozil's overall performance on Tuesday. As well as Ozil played I thought Wenger was over-effusive in his assessment. Ozil didn't run the game in the way that Dennis Bergkamp or Thierry Henry or Patrick Vieira had for us in the recent past. Ozil was a very important part of the machine the other night, obviously, as you could clearly see by his goal and the way he set up the second for Giroud. But I don't quite go along with Arsene's comments (though I loved his reaction to Ozil's goal). As I say, it was unusual for Wenger to go overboard like that on an individual. My brother suggested after the game that it was maybe an attempt by Wenger to get opponents to pay too much attention to Ozil, thus allowing space for others to flourish. Personally I'm not sure. One more line on Ozil is that the TV pictures do not do justice to the quality of the goal he scored. Quite apart from not really being able to appreciate the contribution of Giroud, or the well weighted pass from Ramsey, the finish was among the most spectacular you will ever see. Honestly, if you weren't in the stadium I really don't think you know how good it was.
For me, Olivier Giroud was the key man the other night. It was the complete centre-forward performance. Giroud showed pace, power, skill, touch, movement and finishing on the night. Napoli's central defenders had no answer and the only time they "beat" him in the air was when they stuck their forearm or elbow in the back of his neck. I still believe he might not be the answer in terms of scoring 30 goals a season, but Giroud is playing so well at the moment that he is rivalling Ramsey, Sagna and Gibbs as our best players so far this season in my opinion.
The nature of the performance on Tuesday created a wonderful atmosphere in the stadium. Put together with the winning run you feel there is a huge sense of belief and optimism in the supporters at the moment. It's a feeling I've not had for at least five or six years, probably since the year Eduardo had his leg broken (the feeling evaporated that day). I've long believed that atmosphere in the stands is created by performance on the pitch. The long and loud singing of the old Highbury back-and-forth between the stands was great (though I noticed the Red Action section were not impressed and tried to drown out those songs by sparking up something different, something of which they should be ashamed). In it's own way it was the best night and best atmosphere we've had since moving down the road, and that is down to the players and the results they've produced. Maybe Tuesday will prove to be the highlight and things will drop away slightly both on and off the pitch, but credit should go to this squad (and that's what they are) for the way they've got us dreaming, even just a little bit, that things are on the up again.
There is an intangible feeling right now that you can't describe, but it's the feeling that comes with winning games and properly going after trophies. Ozil's signing no doubt has lifted everyone of us, both players and supporters, and that bounce effect might yet carry us deep in to the Premier League season.
Posted by DvbrisG at Thursday, October 03, 2013