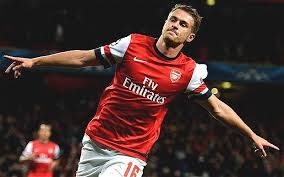 Before he had his leg smashed by that boneheaded idiot at Stoke Aaron Ramsey had been getting in to the Arsenal midfield on merit. He had produced some excellent displays and scored one or two goals too. He was rapidly becoming a fans favourite and looked another inspired Wenger signing. All that changed, of course, with his leg hanging off that evening. His return to the side was naturally met with warmth and he capped it with a superb display against Manchester United which included the winning goal. After that it all went a bit wrong.
I think the performance and goal against United probably skewed all our views. He was so good that we probably assumed he'd got over the leg break and was going to pick up from where he had left off. This was clearly stupid of us all. When you stop to think about it you see that none of us can even begin to understand the balance of Ramsey's mind. Every time he went near a big defender he must have been concerned it was going to happen again. How long does it take for your confidence to be restored so much that you can play without necessarily expecting some thug to take you out? How many times do you have to take a decent whack on the damaged leg before realising it's not just going to snap again? The psychological trauma must be unreal. Then there is the physical side. The recovery that allows you to run and kick a ball is long enough. But how about building up the genuine strength in that leg to allow you to play the sort of all action running game that Ramsey plays? I think the fact that, since the start of his run in the side (I would say since the Spurs away game last season), he has been among Arsenal's best players we can assume it takes at least 18 months.
This time last year I think he'd reached the very bottom. Ramsey had struggled badly in the season before as he was used at the front of the midfield, effectively having to replace Cesc Fabregas. He was off the pace, and often far too ponderous on the ball. When he got a chance to score a goal you might as well have not bothered. All of this was in marked contrast with before the injury. Last year he found himself playing wide right, or even at right-back on too many occasions (of which just one would be too many). Not being played in his own position certainly did not help Aaron Ramsey to regain his form. The Manager has to take more than his share of the blame, as well as being given a pat on the back for his persistence with the boy.
I was as guilty as most in criticising Aaron Ramsey over the last year. I had sympathy for him at times because he was being played out of position, but he simply didn't seem good enough for Arsenal anymore. Obviously he was a different player to the one that we'd been watching before Shawcross got to him. It was clear to me that Shawcross had ended the chances Ramsey had of being a player at the very top level. The fact that it was the broken leg that had caused this was neither here nor there, however. Ramsey wasn't good enough and never would be. I would cringe and moan when he'd be brought on, or moved wide, at a time when we would need a goal. He was so slow, and caught in possession so often, that putting him in to the mix was absolutely pointless. The crowd got at him (though he was never booed) and he was on the verge of replacing Eboue in the minds of some (the presence of Gervinho meant that particular slot was already taken).
I have now to apologise to Aaron Ramsey as he is back in the side on merit. He is playing the same level of football (in fact it's probably better) that he was before that evening at Stoke. There is an extra yard of pace in his game. He doesn't hold the ball unnecessarily, and uses it quickly to put us on the attack. He is making his own hard tackles, showing that he might just have got over the doubts in his mind. The goals he is scoring at the moment are exactly what we thought we were going to get from him as a teenager.
It is a matter of fact that we were all far too harsh on Aaron Ramsey. Any Arsenal supporter that says they always knew he was going to be this good is a liar. Even Arsene Wenger appears surprised at the turnaround in Ramsey from this time last year. I am delighted for Ramsey that he is showing such form. We have to hope that he continues to play like this, and get even better. I wonder if Jack Wilshere, having been out for a similar amount of time (and at a similar age) to Ramsey, might benefit from the level of hindsight we're all getting right now. Jack might well be given the time to find his feet again in a way that Aaron wasn't. Let's hope so.
Posted by DvbrisG at Monday, September 16, 2013