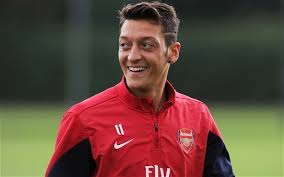 The waiting is nearly over

It seems like an age ago that Mesut Ozil joined Arsenal. The international break couldn't have been more ill-timed for the expectant Gooners. Fortunately the new man has got through the two games for Germany unscathed and is fit and ready to wear Arsenal yellow tomorrow for the first time.
To say that we Arsenal supporters have been a bit excited about Ozil's arrival is an understatement. Leaving aside the smug self-satisfaction that came with poaching Sol Campbell in 2001 I have only known such a reaction on one occasion, and that was with the signing of Dennis Bergkamp. I was only three when Charlie Nicholas came down from Celtic so I don't really recall what that was like. I said on here the other week that there are a number of parallels between the arrival of Ozil and the signing of Dennis. I hope that their respective beginnings at Arsenal will not be quite so similar.
Having built ourselves up in to a frenzy over Ozil it will be very easy for us to be disappointed tomorrow. I'm sure Arsene Wenger would prefer to ease in the new man with a start on the bench, but injuries may force his hand. Ozil will have had just two training sessions to get to know his new colleagues ahead of the match at Sunderland. It's not ideal to say the least. Having said that, Ian Wright played the day after he signed and scored at Leicester, before getting a hat-trick just four days later at Southampton. That being the case, there shouldn't be that much to fear for a World Class player like Ozil. Personally I would still start him from the bench, with Flamini, Wilshere and Cazorla in midfield. That would potentially necessitate playing either Ryo or Gnabry from the start (which almost certainly would not happen) and negate the need to move Cazorla from his most influential position on the pitch at kick-off (there is also the "option" to play Monreal or Gibbs on the left of midfield in order to let Ozil get a look at things from the sidelines).
Whatever happens in terms of Ozil starting or not I would urge all of us to not expect too much too soon. If he plays really well tomorrow then it's a bonus. If he struggles a little with the pace of the game then perhaps it's to be expected. While Di Canio is no Sam Allardyce I fully expect someone to be detailed with giving Ozil an early kick. I'm assuming that Lee Cattermole is out injured (or suspended) at the moment, but the likes of Seb Larsson have shown themselves well able to leave a boot in on occasion. The big shame from an Arsenal point of view is that John O'Shea is suspended as I'd have fancied any combination of Arsenal forwards to give him plenty of trouble. Di Canio will have his boys well fired up for this one, especially after making such a horrendous start to the season. Arsenal will have to deal with that and keep playing their football. If Sunderland don't make a fast start, then we must really go for it from the off.
Ozil will also be sharply watched by our friends in the media. You can almost hear the pens and knives being sharpened in the hope that he is a flop in the early part of his Arsenal career. I remember well the treatment handed out to Dennis Bergkamp by the "experts" that appear in print and on our television screens. At £42.5m there is no doubt they will be constantly bringing up his fee if he does take time to adapt.
I hope he can hit the ground running, as he has a tough couple of weeks ahead. Having only arrived here on Wednesday, Ozil will be travelling to Sunderland today, before going to Marseilles for the middle part of next week. We play Stoke a week on Sunday. In between times he will be trying to find somewhere to live, as well as sorting out his affairs in Spain. This is another consequence of doing our business so late on. I hope it's not something that adversely affects our star player. Hopefully we're celebrating a Vieira-esque debut tomorrow evening, with a little bit of Glenn Helder thrown in.