Back among the big boys 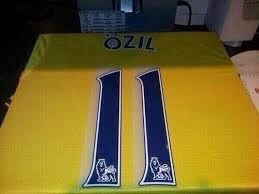 
Finally we have made not just a signing, but a signing that has Arsenal fans excited about the prospects of the Club. Make no mistake about it Mesut Ozil is a signing of Bergkamp proportions, not just for what he brings as a player, but for what his very presence and willingness to sign for Arsenal means for the future. Most astute Arsenal historians would not point to the arrival of Arsene Wenger as the making of the modern Arsenal, but to the signing of Dennis Bergkamp by Bruce Rioch and David Dein. Bergkamp was immediately followed by the England Captain, David Platt, who was brought home from Italy by Arsenal. It was a statement from Arsenal that things had changed. We were going to play football among the big boys again. Now, after years of frustration at the lack of spending and the lack of World Class players, history seems to have repeated itself and we have brought in a genuine football superstar.
The parallels with Bergkamp are striking in that Dennis was the first World star to arrive in the Premier League before his peak years. Ozil is just 24 years old and is on a five year contract. Assuming he can adjust to English football we are in for a treat for at least the next three years and I can’t wait to watch it. If Mesut Ozil impacts on Arsenal and the Premier League in the same way that Dennis Bergkamp did then Arsenal can re-join the top table and be a massive force. To spend £45m on a player is beyond anything I ever expected from Arsenal, and it is a massive thrill to see us doing this kind of business.
If there is a disappointment this morning then it’s the feeling that we remain at lease one player short. Emiliano Viviano has been brought in to provide competition to the two Poles in goal. Obviously I would have preferred a new first-choice with real quality, but the Manager is putting his faith in Szczesny to fulfil his potential sooner rather than later. I am now firmly of the opinion that Bacary Sagna is more than adequate back-up at centre-half. With Jenkinson, Flamini, Gibbs and Monreal to cover the full-back areas as well I think we are just about okay at the back. I would also have liked a proper defensive midfield player to come in, but Arteta and Flamini should provide a reasonably effective sticking plaster in the short term. Elsewhere in midfield we are well catered for. The problem lies with the lack of strikers.
I am amazed that after a Summer of chasing various high profile goalscorers we’ve ended up without one. Olivier Giroud has started the season on fire, but he has twice publicly stated the need for someone else to come in and help. Yesterday we were scuppered by Mourinho on a last minute deal for Demba Ba. I know Arsenal genuinely thought they had a deal in place, and I believe Ba may have even undergone an Arsenal medical. Despite the excellent work that went in to securing Ozil I would have to question the fact that we were trying to do a deal with Chelsea at such short notice, knowing full well that Mourinho is a horrible scumbag. Even after the Ba deal fell through there should still have been time to bring in someone, even if they might have been a step below top class. As it stands we really have Giroud and nobody else. Yaya Sanogo is simply not good enough at the moment from the limited sightings we’ve had of him so far. He certainly looks no better than Chuba Akpom, who impressed in pre-season. Walcott and Podolski are incapable of playing as a lone striker against two decent centre-backs. The only other option is Nicklas Bendtner, a man who long ago burned his bridges with the supporters – even those of us who always defended him – through his own arrogance. It is a chronic shortcoming in the squad, but it will stay that way until at least January. With around £60m still sitting unused, and massive wages cut off the bill this Summer, it beggars belief that what appeared the priority position throughout the window was not filled. As it is, Bendtner has issued a timely statement saying he will do his best for the Club now that he is staying. I hope he does. And since he’s going to be wearing the shirt, I hope everyone gets behind him.
So we go forward from now with the squad that is in place. I’m pleased the transfer window is closed. We can now get on with things and go about trying to challenge. I believe a striker would have made us credible contenders, but we are now relying on goals from midfield and from out wide. Can Cazorla and Walcott become Bobby and Freddie? Let’s hope so. We will start to find out after another interminable international week.
As you know, I don’t do transfer gossip on this site. That being the case, I am rather pleased to have not wasted your time and mine, given that Arsenal signed not one player we were “linked” with in the Summer. Paul Pogba, Julio Cesar, Julian Draxler etc etc etc. The press don’t know who Arsenal are after unless we make a bid and it’s revealed by the potential selling Club. So let’s continue to ignore it, shall we?