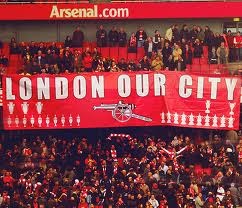 Yes, yes it is

I imagine that Sir David Frost is up there now, in his smart suit and Arsenal red and white tie, regaling VIP's with tales of the North London Derby. I hope he enjoyed that win from his new seat in the big directors box in the sky. And what a win it was.
Arsenal weren't supposed to win today. Pencils were sharpened and ready to destroy us ahead of the game today. As I said yesterday, whatever your views on Arsene Wenger and Ivan Gazidis and the lack of signings and just about everything else that's negative, today was a day to come together. That was certainly what happened and it is one in the eye for The Sun and Sky Sports and Match Of The Day and all these other anti-Arsenal outlets. I wonder what Paul Merson has to say now. All he's gone on about after our last three games is that "they weren't playing a Spurs". Well today they did and they dished out a 1-0 spanking that could and should have been every bit as humiliating as the 5-2's had been, such were the opportunities we failed to take. It was a great display by Arsenal all over the pitch. From Szczesny to Giroud I thought we were pretty outstanding.
I'm not going to assess the match any further as it's too difficult to be rational this soon after such an important victory. What I will say is that Mathieu Flamini was superb on his second coming. The leadership he was showing in midfield towards the end, the arm waving, the ordering about of colleagues and the organisation was something that only experience can bring. With the tireless Ramsey getting up and down the pitch to make more tackles than anyone else on the pitch it was a master class of defensive midfield play. I christened our best centre-half as King Koscielny last season. Well, if Laurent is the King of the defence I would like to now anoint Bishop Flamini of the diocese of the Arsenal midfield - only a Bishop could give such direction to his flock.
I'm rambling so I'll leave it there. Get in you Gunners! Maybe more tomorrow when I've calmed down a bit. Let's make those signings Arsene!
Posted by DvbrisG at Sunday, September 01, 2013