Results of the unexpected - Arsenal set records in Marseille 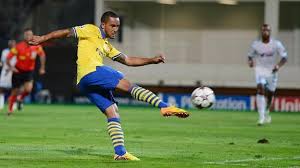 Unheard of technique from Theo

I was at work yesterday evening and was intending to avoid the result in order to watch the game "as live" when I got home. The office I was in has Sky News on the TV at all times so hearing the score was an inevitable consequence. I still watched the game when I got home, just minus the jeopardy of worrying about the outcome.
The first-half saw us not finding our customary passing game. Marseille were dangerous down our left, where Wilshere and Ozil clearly don't much fancy playing in the wide area. Kieran Gibbs did brilliantly given the lack of help from in front. Put together with a superb goal line clearance, following a cock-up between Mertesacker and Szczesny, and his assist for Theo's opener (the first good cross Gibbs has put in for ages - amazing what happens when you get the ball in the air and past the first defender) there was only one Man of the Match contender in my view.
In the post match interviews Sky's Nick Collins asked both Aaron Ramsey and Arsene Wenger if the "first goal came at the right time?" I'd like to know what the wrong time is to open the scoring. As crap football cliché's go that must be right up there at the very top of the list. When it did come it was a super strike from Theo Walcott. Arsene was right when he said it was probably the most difficult chance he's had all season. I would never have believed that Theo had the technique to strike an outrageously difficult volley like that. It truly was an outstanding piece of individual skill. Hopefully it provides Theo with the necessary confidence to start putting chances away again.
The second goal had an element of fortune as I think Ramsey's shot would have been easily saved without the deflection. Having said that it was another example of why Arsenal players should have a poke a lot more often. Frank Lampard has proved down the years that a well struck effort, taking a deflection, will often fly past the goalkeeper. With players like Ramsey, Arteta, Cazorla, Ozil, Wilshere, even Vermaelen, we should be seeing more efforts from outside the penalty area. One feature of our play that has frustrated me for years has been the square passing across the penalty area, and a massed defence, when just having a go might create something in itself. If you don't buy a ticket etc...
Marseille's penalty looks like it may have been soft. I was impressed that Ramsey looked angry with himself afterwards. It showed that he wants to be eradicating silly errors, and the way he miscontrolled the ball in the lead up to the spot-kick was the sort of thing he was getting panned for a year ago. I have no problem with players wanting to achieve something approaching perfection in the their game and, more than that, being annoyed when they don't.
So it's now ten away wins in a row. That was completely unthinkable after the Spurs game last season. The win at Bayern Munich was completely crucial. Alan Smith played it down last night on Sky with the idea that Munich didn't really play in that game. I would suggest that Lukasz Fabianski's display on the night would tell you otherwise. Since that defeat at Tottenham our record is:
P18 W15 D2 L1 F36 A11
That is an outstanding run by any measure. Four of those eighteen games have been in the Champions League, three of those four away from home. Two goals per game shows an upturn in the attacking side of our game and, while the defending could still be better at times, those 11 goals are punctuated by at least five penalties (or rebounds from penalties). It's the sort of run that brings Club Level season ticket holders to matches. It's also the sort of run that will bring the confidence required to challenge, and maybe win trophies. The squad still looks one or two players short, as you can see by the bench last night, and respite for a number of players is a long way off. It's a bridge that will eventually have to be crossed, I'm sure. In the meantime I'm really enjoying it. I haven't felt this good about Arsenal for a good few years now. Looking forward to Sunday already.
Posted by DvbrisG at Thursday, September 19, 2013