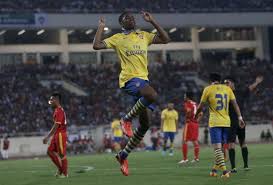 
A win is a win, even in pre-season. Winning is a nice habit to get in to. Winning ugly also has a lot going for it on occasion. Today was definitely one of the latter. Chuba Akpom's opportunism and genuine strikers instinct rescued Arsenal from finishing their Asia Tour with one or two red faces. Incidentally, you might not have noticed that Manchester United are not having very good results so far, such is the lack of press criticism - a bit different to when we were struggling in the Far East this time last year. I digress, but they've not yet won a game under Moyes, all against sub standard opponents.
I'll keep this fairly brief as I want to get on with watching the athletics on BBC this evening. I thought Arsenal's players looked a bit demob happy out there today. I can imagine after two weeks of far too much glad handing the boys were looking forward to boarding the plane home. They started brightly enough and Theo Walcott made a great run through the defence before hitting the post. I thought Olivier Giroud played really well again and was unlucky not to score. Sadly Theo's finishing was to become the major feature of the game as he missed sitter after sitter. He is usually pretty dependable in front of goal, but in the last two games on tour he has been woeful when through on the goalkeeper. The Ox also hit a lovely volley that came off the bar, but that was just about his only contribution. The only other thing of note in the first-half was an outstanding save from Lukasz Fabianski and I thought the big Pole was brilliant all through the game.
The second-half saw the usual raft of changes and Aaron Ramsey was particularly impressive from the bench. Lukas Podolski scored with a typically thumping shot in to the corner. Tomas Rosicky was too good for the Japanese opposition when he got hold of the ball, but that wayward finishing from Theo (who was skipper after half-time) continued to thwart Arsenal. At the back Bacary Sagna had moved to centre-back again and he kept Arsenal together on more than one occasion. It was no surprise when Urawa Red Diamonds did equalise, and it was also not a surprise that it came for a set-piece. If anyone thinks things have changed they are very much mistaken, I'm afraid. For five minutes after the goal the Japanese were right on top, but Arsenal weathered the storm, despite nobody playing the holding role in the absence of Mikel Arteta.
Having got through a tough spell Arsenal finally got a lucky break at the other end. The opposition defence went all Squillaci and left their goalkeeper all at sea. Chuba Akpom, despite playing wide, had followed the ball all the way in to the penalty area. As a result he was on hand to calmly stroke home the winner. I strongly doubt he'll ever be an Arsenal first-team player of repute, but he's certainly done himself no harm on this tour. The game got a little bit feisty towards the end and Rosicky and Podolski were particularly unimpressed with one or two of the opposition challenges. Maybe it was a test that was needed.
Of the youngsters on the tour there are one or two that have pressed their claims. I've already mentioned Chuba Akpom, but the stand out figure has been Gedion Zelalem. He was quieter today in a more physical game, and that is perhaps his problem at the moment - he needs to fill out a little and gain a little strength and physicality. Elsewhere Chuks Aneke, Kris Olsson, Thomas Eisfeld and Damian Martinez have not been involved as much as they might have hoped, and the writing may well be on the wall for the three outfield players. Martinez has plenty of time to impress further and may be loaned out if we bring in some experience to the first-team squad. The other young player to feature extensively on the tour was Serge Gnabry, who started the game again today. I have to say I've been a little disappointed with Gnabry who has looked a real cut above up until now. Again, a loan is probably on the cards, hopefully to a top Championship club, or maybe a lower level Premier League side. We will see.
Right, that's it for now. I'm off to watch some Usain Bolt action. With the team back in England, and the CEO and Manager, perhaps we will finally see some transfer movement. I'm not holding my breath, but the clock is ticking.
Posted by DvbrisG at Friday, July 26, 2013