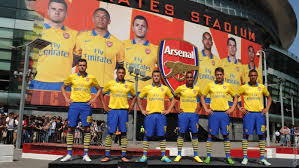 
Better late than never, I suppose, but it looks like Nike and Arsenal have finally got the picture. The traditional fans have what we want, and it is gloriously yellow and blue. With this being Nike's final season as the kit supplier to Arsenal they are going out on a high. I have to say that just about everything about the new away kit is spot on. I particularly love the hooped socks which set it off a treat and are, unlike most of the nonsense Arsenal have tried to market their kits with in recent years, a genuinely traditional piece of Arsenal history.
I could sit here and write plenty about the ham-fisted "reveal" of the new kit, but it's not really worth it when the kit is so spectacularly brilliant. Unfortunately Arsenal are to marketing what Spurs are to winning League Titles. The mural on the side of the stadium was all over Twitter last night as Arsenal failed to hide it with covers before they started work on it. Only they could get their "audacious stunt," as they put it, quite so wrong. As I say, I could say plenty more, but it's not worth it on this occasion.
I'm not going to linger any further as it's late at night, and there's not much else I can say about the new kit, other than that I think it's the best away kit we've had since the gold shirt of 2001-2003. What I will also say is that it is an "Arsenal" kit. Arsenal players will look right when they wear it. It is, dare I say it, the sort of kit you see Arsenal wearing when they win trophies. We can but hope.
Posted by DvbrisG at Tuesday, July 09, 2013