Another one bites the dust for Arsene and Arsenal 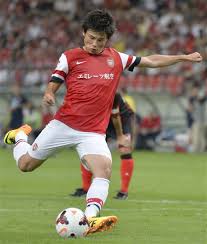 I hope Ryo Miyaichi enjoyed his testimonial match on Monday in Nagoya. It was a very nice touch for Mikel Arteta to pass the youngster the ball for the penalty. It gave a local lad the chance to score in front of adoring fans and he certainly took the opportunity - that is how to take a penalty! I strongly suspect that, after this our is over, we won't see too much of Ryo in an Arsenal shirt again. He isn't good enough yet to play for us, and I doubt he ever really will be.
Aside of that I thought there was some decent stuff again from Arsenal. The old problems of over playing when in possession, and not defending the ball properly when the opposition get it wide were again to the fore, but overall it was encouraging again. I thought Carl Jenkinson had a poor game, while the news of Nacho Monreal's injury puts us frighteningly short at left-back. On the positive side we got a goal from an excellent cross by Tomas Rosicky. The finish for Giroud was simple enough, but you have to be there to put the cap on superb delivery like that. Six goals on tour so far is a fine record for Giroud. The final goal was set up by the outrageously impressive Gedion Zelalem. The passes he is playing beyond defenders are as close as anything I've seen to Fabregas in an Arsenal shirt in recent years. Theo should have scored three or four goals on the night, and with service like that from Zelalem he could have a hat-full on a regular basis. I can see young Gedion being around the first team a lot more than I had anticipated before the tour began. Obviously the opposition we are up against allows him time to pick those passes, but you still have to execute them. He is a real talent. The tour finishes on Friday and then it's back to London Colney for more pre-season training.
As it stands there are still no new faces set to be joining the squad, except for Yaya Sanogo. Not a penny has been spent. There can be no doubt that we have chased Gonzalo Higuain since last season ended. I don't know the truth in the rumours that we agreed a fee with Madrid, only for them to then ask for more money. The fact is that if you don't have it in writing then an agreement never happened. I strongly suspect Arsenal went as far as Wenger allowed in terms of what he valued Higuain at and then would go no further. Let's face it, this would not be the first time Arsene's tightness had cost us. As a result of our two months of prevarication Higuain is signing for Napoli. The Italians got the deal done is less than a week. Is it any wonder we don't sign anyone? I wanted Higuain at Arsenal in a big way. He was the sort of goalscorer this team requires. Now we've missed out again.
So it seems all our eggs are in the basket that contains Luis Suarez. I think it will cost us upwards of £45m to sign the Uruguayan. When you think we could have had Higuain and Fellaini for not much more than that you have to wonder why we are pursuing Suarez. I'll say not too much more on him for now as it's still all gossip, and I don't do gossip on this site. However, I worry about the problems he has, the problems he brings, and the fact that he's suspended until October. Does that make a £45m+ outlay worthwhile? More on that if and when Suarez joins Arsenal.
Posted by DvbrisG at Wednesday, July 24, 2013