"Running Man" is an Arsenal sham 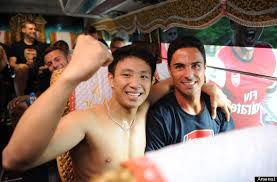 Unbelievable
Let me start with a disclaimer and say that everything you're about to read is purely my opinion and not a statement of known fact. I may be completely wrong, but you can make up your own minds about what I say.
I am a cynic. There's no doubt about that. My cynicism reaches unmatched levels when referring to anything Arsenal do. That being the case I am taking the whole "running man" thing in Hanoi with a massive pinch of salt. My view is that it was set up by Arsenal FC as a publicity stunt, promoting the Club and it's sponsors to a Worldwide internet and TV audience - the individual concerned was wearing his official, Fly Emirates, replica kit, was he not?
As a tool to deflect attention away from the lack of transfer activity it has worked an absolute treat - have you heard much in the media about Arsenal apart from the "running man" in recent days? Aside from it being picked up on Arseblog, there has been little notice taken of Wenger stating we're not even close to signing anyone - in other words we haven't even had any bids accepted.
Let's consider one or two of the facts here, shall we? This man just happened to be seen running alongside the coach by the players. It just happened that an official TV camera was there filming on the coach for Arsenal's newly launched Youtube channel ahead of the start of "Digital Membership" at Arsenal. Stuart Macfarlane, the Arsenal photographer (who rarely travels on the team bus, and certainly doesn't thake pictures on it - have you ever seen photos from that particular part of the inner sanctum?) just happened to be with the players, camera in hand and snapping away. On a whim it just happened that someone decided a random member of the public should be invited on to the Arsenal team bus amid the security of the police escort. Wojciech Szczesny just happened to be inspired to introduce the video of the "running man" on Arsenal's very polished Youtube video. The whole thing stinks like used socks. This man was just an ordinary Arsenal fanatic in Vietnam, we are expected to believe. He got his shirt signed by everyone on the coach and then left with the  wonderful memories of meeting his heroes. Except for one thing - it didn't end there. I've just found this picture on the internet, taken at the Vietnam match, and published on the Daily Mirror website: 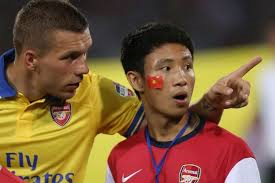 
Do you recognise the bloke on the right at all? And what's happened to the signatures on his Arsenal shirt? And how come he's pitch side with Lukas Podolski? I think Ivan's PR department has been rumbled, don't you?
Posted by DvbrisG at Friday, July 19, 2013