Ins and outs on Arsenal tour, Thanks to Sky and BT 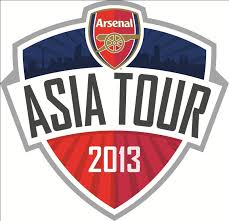 Can't wait for this rubbish to be over with

Over the last few weeks Arsenal's official website has insulted our intelligence with promotional material for their Asia Tour. I am sick of reading about it. So called interviews with players telling us how the nations out there are "up and coming" and could "be a force" in the years to come. Then we hear how they "can't wait" to meet the "loyal fans" in Indonesia or Japan or wherever else it is they're being dragged to as Arsenal promote their sponsors. Quite what the players get from this kind of trip, aside from a welcome broadening of their horizons, I would have to wonder. When we are being told by Arsene Wenger that they are "little bit fatigued, second half" come late October I will be harking back to a whirlwind of four games in twelve days in three different countries. Quite when the genuine pre-season training is getting done here I can only wonder. Given that the Manager always preferred the surroundings of the Austrian countryside for a proper pre-season training camp I strongly suspect he is out there under sufferance. For once I have sympathy with Arsene Wenger. As for the events organised for the fans to meet the players out there I can only feel cheated - when do I get to meet the players for photographs and signing sessions? Hey, I'm just a long term season ticket holder so why should I get any sort of privilege like that? Personally I will be glad when this rubbish is over with for another year and we can concentrate on the task at hand. Incidentally, it looks like ESPN are covering the tour with live coverage of all the matches.
As for the touring party there are one or two notable absentees. Ju Young Park, despite his marketability in that part of the World, has not been called upon to join the Arsenal players. We all knew his future at Arsenal was non-existent, but if they're not even going to use him for a photo opportunity then I sincerely hope we're in the business of paying the bloke off. Also missing is Marouane Chamakh, which surprises me slightly. He has been fairly prominent in the photos of the pre-season training so far, so his absence from the tour squad makes me hopeful that a transfer is in the offing. Both the player and Arsenal need him to move on. As for Nicklas Bendtner, nobody knows where he is. Of more concern to me is the absence of Thomas Vermaelen. For the third year in a row the Club Captain has not gone away with the squad. It hasn't ended well on the previous two occasions and, given the fact he couldn't get in the team at the end of last season, I am very concerned that Vermaelen has developed a convenient injury. Arsenal need quality like Thomas Vermaelen in the squad. If he does leave I would see that as a big blow.
In terms of those included it is no surprise to see Ryo Miyaichi travelling out for a tour that includes a visit to Japan. However, I would not be surprised to see him off on loan again the moment Arsenal return to London. He seems a long way away from playing in the Arsenal side and I doubt very much he will ever really be part of the set up. As always there are a number of youngsters included. Serge Gnabry and Tomas Eisfeld get another chance to impress, while Gedion Zelalem is a very well fancied prospect who could well make some sort of breakthrough over the next year. Also there are young Englishmen Chuba Akpom and Chuks Aneke, as well as Kristian Olsson. I doubt any of that trio will ever make it at Arsenal, but here is a shop window for them. I'm a little surprised that Spanish full-back Hector Bellerin was left in London and you'd have to start questioning his long-term future having not made it in to the long list for these games.
Sky and BT Sport finally got around to announcing yesterday how the fixtures will really look up until early December. I may have mentioned above that I am a season ticket holder. Regular readers will also know that I am a shift worker, and that my job prevents me from getting to some matches these days. In an ideal World that wouldn't be the case, but needs must. That being the case I am delighted that the matches against Spurs and Liverpool have been moved for television. Thanks to that decision I can now not attend either of those games which, as you can imagine, has me utterly delighted. Still, as long as someone who never leaves their armchair can watch it live, who cares about those who've handed over their money to watch their side in the flesh. I know I am not alone in suffering like this when it comes to the TV fixtures and it gets me more and more fed-up every time the fixtures are interfered with. Thanks Sky and BT Sport for already starting to spoil the new season for me.
The Arsenal season on the pitch gets under way this evening with an U21 fixture at Sutton United. If I wasn't working I might have gone and watched that one, but such is life.
Posted by DvbrisG at Friday, July 12, 2013