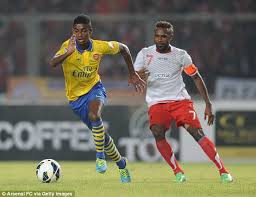 
I'll keep this fairly brief as it's 1a.m. as I write. I've just watched the match from earlier today (yesterday now) and it was a very comfortable way to get the pre-season fixtures off and running. Of course people will rightly say that we were playing against fourth or fifth rate opponents, but so were both Manchester sides who contrived to lose their opening friendlies of the year. You can only beat what's put in front of you, and Arsenal's mix and match squad for the day did just that in a fairly emphatic way.
I thoroughly enjoyed the first goal with powerful running from Alex Oxlade-Chamberlain followed by good footwork, excellent skill, and a perfectly weighted pass in to the path of Theo Walcott. The finish from Walcott wasn't bad either. In the rest of the first half I thought Serge Gnabry was the man who was trying to really make an impression and try to get noticed. What better way to spend your eighteenth birthday than on the pitch for Arsenal? We saw more than a couple of glimpses of Gnabry last season, and the overall impression was pretty good. Today he did nothing to dampen the optimism about him.
The second half was all about Arsenal and their attacking. Obviously there was the expected raft of changes and Chuba Akpom was rewarded for making a number of good runs with a goal. His finish was assured, following superb work from Gnabry out wide. Before the third goal there was a showcase for the talent of Gedion Zelalem.  I mentioned the young German was well fancied at Arsenal when I last wrote here on Friday. One pass he played inside the full-back for Eisfeld, with the outside of his right boot, really deserved to be buried. Interestingly, for me, Arsene Wenger was prepared to let Zelalem play in the middle of midfield. Often you will find him pushing a younger player out wide, but such is the talent of Zelalem that I suspect Wenger wants to have a good look at the lad over the next two or three weeks. Who knows, a decent Emirates Cup and he might be rewarded with a squad number. He will certainly be pencilled in for the League Cup when it gets under way.
After that we saw two super finishes from Olivier Giroud, who didn't look to be allowing talk of the possible arrival of big name centre-forwards to affect him. The first of his goals, with the outside of his left foot was exquisite after good play down Arsenal's right. His second was a storming strike in to the roof of the net. Tomas Rosicky then took over and combined with Lukas Podolski for a lovely goal, finished by a trademark Podolski exocet shot. Kris Olsson bagged a debut goal following more super play from Rosicky (I'm aware that ESPN's commentator kept getting Olsson and Zelalem mixed up - one of them is black, the other is white, so that is pretty awful). The final goal again involved Rosicky as he crossed for a lovely knock-down by Giroud, and a stunning left foot finish by Thomas Eisfeld. The young German was a stand out performer on tour this time last year, and may consider himself unlucky not to have had more first-team action than he did. After Christmas he struggled a bit, but the rest afforded to him by the close season might see him come back refreshed and raring to go to make that next step up.
All in all it was a useful run out for Arsenal. Seven goals are always nice, and Arsene Wenger will be relatively pleased. The new kit has been christened in a very nice way, and I hope that bodes well for the season ahead.
Within the last hour or so the players have touched down in Vietnam as they prepare to play in Hanoi this Wednesday. Jack Wilshere is set to make his first appearance since surgery in this game having missed the Indonesian match with a "bug" according to Arsenal. I would also expect Wojciech Szczesny to maybe get some match action out there, ahead of the games in Japan. Whether Ryo Miyaichi is fit enough to take the pitch before Arsenal reach his homeland remains to be seen.
I'll try to write more as the week progresses, time permitting. Wouldn't it be nice to have a big signing announced to get the week off and running?
Posted by DvbrisG at Sunday, July 14, 2013