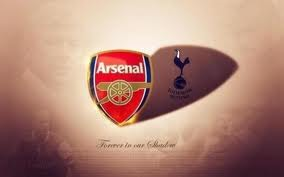 Whatever happens, our shadow will be forever cast


So here it is. We've arrived at Tottenham's biggest game of the season. This, finally, is their year. That Gooner scum is about to be dispatched for good and the power shift in North London will have finally arrived. Only its not quite that simple, is it? There is no doubt that sometime, and it could well be this season, Spurs will finally get the better of Arsenal across the course of a season. I said at the start of the campaign that I feared Villas-Boas more than any Tottenham boss of many a year. In recent weeks, with Bale playing superbly, they have put together a fine run. But this is the North London Derby and things are not straightforward. If the game this time last year should teach the Neanderthals of N17 anything then it is that they should get cocky against the better half of North London at their absolute peril. Remember all that "mind the gap" crap? I reckon they do.
It says it all, perhaps, that Arsenal supporters have been in uproar about the way things are going, while the Tiny Totts have been revelling in their recent form, yet a win for Arsenal tomorrow will see only one point separating the two sides. I suppose when you've not won the League in 52 years you try to create success out of something that isn't really there. Us Gooners have higher priorities when it comes down to it. It's an expectation born of success. The sort of success the cretins from White Hart Lane can only dream about - and you can be certain they've been doing nothing but dream of it since 1961.
I've very much enjoyed the way the press has built up our opposition over the past week. The adulation for Gareth Bale (undoubtedly a fine player in good form, but you shouldn't win Footballer Of The Year off the back of one good month) has been nauseating and enjoyable in equal measure. If ever a team has been set up for a fall then it's that lot. I reckon the Spurs loving media will go in to meltdown if Arsenal happen to pull it out of the fire tomorrow. We've done it before. There will be nothing better to see tomorrow than Arsenal celebrating a win, but Bale and a plethora of journalists crying over their predictions of times-a-changing would certainly add to the enjoyment.
The travelling Gooners will be running the annual gauntlet of hate tomorrow. Low profiles will need to be kept, with any semblance of red hidden away until safely inside the away end, or back at Finsbury Park. I suppose the crowd at Tottenham should be congratulated in a way. They may be the most charmless and offensive bunch of knuckle-dragging clowns in the Premier League, but they are also surely London's most popular and successful "Care In The Community" project. I hope the travelling Arsenal fans stay safe, and come away with a win to savour.
Just to finish I'll point out some anniversaries for this weekend. Yesterday marked 26 years since Tottenham announced the ticket details for Wembley at half-time, which merely served to inspire Viv Anderson and Niall Quinn to earn us a replay in the Littlewoods Cup semi-final . Tomorrow it's 22 years since Arsenal swung the Title race in their favour with a 1-0 win at Anfield, through Paul Merson's goal (I can't find video of that one). And, just for good measure, Monday is the anniversary of Ian Allinson and Rocky crushing the Spuds in that 1987 replay . If watching that doesn't get you in the mood for tomorrow then nothing will. Enjoy it Gooners. Let's hope we show the passion necessary and get the result we need.