Effort but no quality against Tottenham 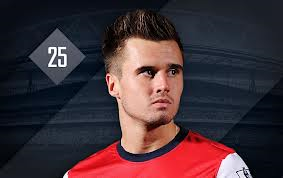 
We got plenty of effort from the players yesterday. I've often criticised this group of players for a lack of it. But we certainly didn't get anything even remotely approaching top class at either end of the pitch. In attack we were never truly threatening after the first fifteen minutes, while the defending was again Sunday League standard. The one player to genuinely stand out as having a good game was Carl Jenkinson and I'll write a little more about that below.
The game saw us start on the front foot for a change. We've often seen the mugs dominate early on in the games at their place with a rabid crowd behind them. Once that first half-hour has been negotiated Arsenal get on top. Yesterday we were in to them from the first whistle. Two or three times we worked good openings, but our final ball was either poor or non-existent. We didn't force Lloris to make a save. The ponderous Giroud took so long to shoot when through on goal that even Mertesacker would have caught up with him. Theo Walcott spent a lot of time getting through the middle and made a lot of runs, only for the ball to go square in midfield instead of beyond Tottenham's high back line. I just don't understand it.
When they finally got hold of the ball they played the exact passes Walcott had been looking for at the other end and the monkey-boy was never going to miss. When Monreal and Vermaelen did their Chuckle Brothers impression for the second goal it was similarly easy for Lennon to put the ball in the net. It's not often I feel remotely sorry for Wojciech Szczesny but he had no chance yesterday. It is beyond my comprehension how international defenders can be so badly caught out. When it happens twice in two minutes it is genuinely scary. Gary Neville pointed out over a year ago that Arsenal try to play offside without pressuring the ball in midfield. Instead of dropping off in that situation our defenders come flying forward, but with no idea of communication or a coherent plan. The end result is almost always a goal for our opponents. Mikel Arteta is incapable of protecting the back four (why should he be?) and so it is easy for any team with a bit of quality to get at us. Bale had not been in the game, but our own fragility gave him one of the easiest goals he'll ever score.
In the second-half we got our early goal that we needed. A couple of minutes later Carl Jenkinson got in down the right and provided the perfect pass for Jack Wilshere to equalise. Wilshere didn't even get a boot on the ball. I thought Jack was poor against Villa last week. He was ten times worse yesterday. He undoubtedly tried, as he always does, but I don't remember too many of his passes finding a red shirt. He had an awful game as far as I was concerned. It's all very well people having a pop at Giroud and Walcott and Ramsey and whoever else, but Jack was equally culpable yesterday and should get stick when it's deserved.
Jenkinson, meanwhile, was playing very well. With Theo constantly moving inside Jenkinson's pace was a constant threat down the right. He was providing the width our game was needing and, after our goal, was letting us stretch their defence. So what does our genius Manager do? He takes him off and puts a central midfielder at right-back. What did Arsenal gain from that move? Why not just take off Ramsey or Arteta and leave Jenkinson to get at them? From the moment he went off our threat virtually disappeared. Unfortunately, when Ramsey was provided with the chance to get us the equaliser you just knew he wasn't going to score. That was our last clear opportunity but, again, Lloris didn't have to make a save.
When we got desperate we had the ridiculous sight of Mertesacker up front again. We started to lump high balls forward, which completely negated our midfield players, and left Podolski out wide on the left and out of the game. I don't know why Podolski is suddenly out of the team. I can't understand why we waited until the 77th minute to put him on the pitch. Santi Cazorla really put in a shift yesterday, but when we started playing high balls towards Mertesacker he was also effectively taken out of the game. Tomas Rosicky, meanwhile, may as well have gone and sat in the away end for all the use he was when the ball came to him. We only made two subs but, towards the end, we had a centre-back, a defensive midfield player and Gervinho warming up. Alex Oxlade-Chamberlain was not asked to have a stretch. All this when we were 2-1 down at Tottenham. It defies belief. And Lloris still didn't have a save to make.