No sympathy for Red Nose and his boys, Rooney for Arsenal? 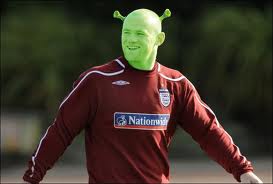 Make him the first of many


For twenty years the media juggernaut that has supplemented the success of Manchester United has managed to ensure that little has gone wrong for them where refereeing decisions are concerned. We all know how it works, and any referee who dares to err from the script is destroyed by Ferguson via his acolytes in the press. The end result is that the official in question doesn't visit Old Trafford (or have any involvement in Man Utd matches elsewhere) too many times in the future. If Ferguson says something about an official the FA will usually turn the other way and pretend it hasn't heard or seen anything. All the while every other Club suffers by playing to different rules. Aided and abetted by Murdoch's empire (which still owned a large part of MUTV until last month) there was rarely any adverse publicity to be had.
Compare that to how other Manager's are generally portrayed. Steven Howard makes slagging Arsene Wenger a weekly event in The Sun. Kenny Dalglish, Rafael Benitez, Avram Grant, Andre Villas-Boas, Roberto Mancini and Roberto Di Matteo (even Jose Mourinho) have all suffered from outrageous negative publicity. They all have one thing in common, along with Wenger, and that is that they were in charge of genuine rivals to Manchester United and Alex Ferguson. No journalists have the bottle to write negatively about Ferguson because he bans them from press conferences or just refuses to speak to them. The BBC found that out to their cost. When Arsene Wenger had his pop at journalists a couple of weeks ago it got a huge media reaction. Yet one journalist dared to write that he couldn't understand why, as Ferguson does this on a regular basis at anything he perceives as negative towards anyone at United - he must really scour the papers to find anything like that. Ferguson's regular abuse of journalists gets no publicity, it seems. Any claim that there is no media bias towards Manchester United should be completely blown out of the water by that revelation.
This week we have seen Man Utd get dumped out of the European Cup after a seemingly dubious refereeing decision. Personally I thought it was a scandal. I mean, on what grounds did the referee disallow Real Madrid's goal before half-time? There was no foul and no offside. The goal should have stood. Then there was the penalty Madrid should have had for Rafael's handball on the goal line. Five officials and they all missed it! Of course, the media haven't written or spoken a word on that, have they? It's all been about the travesty of  Nani's red card. Personally, I don't think that it should have been a red card. However, I seem to remember Emmanuel Eboue being sent off at Old Trafford in the FA Cup for something vaguely familiar. Watch the video and you will see that clapper in chief, Rio Ferdinand, is the first man to go chasing the referee demanding the red card that followed for Eboue. I suppose Ferdinand has form for selective memory though. After all, he is the man who "forgot" he was supposed to take a drugs test. I also remember Robin Van Persie getting sent-off in a European Cup game for Arsenal in the exact same circumstances. The media, rather predictably, didn't react in a similar way back then. Nor did they when Van Persie was disgracefully sent-off at Barcelona two years ago.
Ferguson's reaction to the red card, apart from his Harlem Shake down the dugout steps immediately following it, was to refuse to speak to the press. There is an obligation, under UEFA rules, to do so at Champions League ties. When Arsene Wenger takes defeat badly he is chastised by the media as being "petulant" and a "sore loser". When Ferguson does it his reaction is "understandable" apparently. The fact is that Ferguson wasn't "distraught" as Mike Phelan (who spoke superbly, it should be said) put it. He was simply apoplectic with rage. He went in to five-year-old-child tantrum mode and locked himself in the bathroom, refusing to come out. I honestly thought ITV's commentators and presenter (with the notable and bizarre exception of Roy Keane - that man does not forgive and forget!) were going to cry on Tuesday evening. Make no mistake, if it had been Arsenal I would have been fuming. But you can rest assured the media reaction would have been similarly reversed had it been us. No sympathy. What goes around comes around, and it came around for Ferguson and Manchester United the other night. Long may it continue.

Staying with Ferguson and Manchester United I was shocked when Wayne Rooney was left out on Tuesday. When I saw their team I Tweeted that Arsenal should get in there and sign him this Summer. We've seen this before with Ferguson and high profile players. It goes as far back as Paul McGrath. Fall out with Ferguson and you career at Manchester United is dead. David Beckham, Roy Keane, Ruud Van Nistelrooy, Jaap Stam, Dimitar Berbatov. The names trip off the tongue. So far Beckham is the only one of those bearing a physical scar from his locking of horns with his Manager, but Rooney is almost certainly on the same trajectory as all those named - the one that heads down to the exit door at the Stretford End. I notice that Ferguson has denied a rift today, and said that Rooney is not going to leave. We've heard it all before. There was no rift with Beckham or Van Nistelrooy but they didn't last long after, did they?
As for the possibility of us signing Rooney, why not? There is an argument that he would rather play elsewhere, but I think he'd be utterly crazy to head to Manchester City. I could see him replacing Torres at Chelsea, but that's why we must get in there and get business done. Last week we had the usual "we have money to spend" stuff from Arsenal. Well I've had enough of the words. We've heard the same thing for years, but not had the signings to prove it. I feel that with the sponsorship deals starting, and the shipping off the wage bill of people like Arshavin and Bendtner and co, there is now nowhere to hide. Arsenal really do have money. That money simply must be spent to avoid us slipping even further behind. What better statement of intent than to go and spend £25-£30m on England's best striker? We've all given Rooney plenty of stick over the years, but I'd take him at Arsenal in a heart-beat. It would make a nice change to have him scoring for us, as he's made a career out of doing it against us. Signing Wayne Rooney would get us on a high. I just hope it can happen because I'm certain he won't be at Manchester United come August.