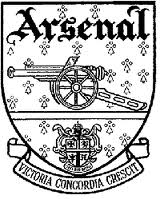 Chicken on a basketball? This is real class


As it's the North London Derby this week I will be displaying no negativity towards the Manager or the team. There is a real need for nothing but support ahead of the visit to the swamp on Sunday. More on that below. However, not every area of Arsenal is off limits when it comes to having a dig. Today's lucky winners are the idiots who run the Arsenal website.
I'm not convinced that any of these clowns are actually Arsenal supporters. Let's be honest, there weren't too many of these "technically minded" people running around the school playing fields with a ball at their feet when we were growing up. I've started to write a full piece on this that I'm keeping in reserve for when it gets a bit too quiet, but the latest thing can't pass without comment ahead of Sunday.
Since it's pretty awful overhaul a few weeks ago www.arsenal.com has been running features in its "Flashback" section. This area of the site gives an account of a particular game against the next big opponents we face, with interviews and photographs and a little bit of free video content. This week they have picked the 1987 Littlewoods Cup semi-final saga for the piece. No problem with that. Anything that gives you a chance to remember David Rocastle getting the winner is a good thing. It's an excellent feature this week, as it goes. Right up until the point you view the video.
I would say that most Gooners who are old enough to remember the night in question will have seen the film plenty of times. They will also be familiar with Brian Moore's "Arsenal, are through to Wembley" line as Rocky's shot goes under Clemence. Why, then, has some idiot at Arsenal decided to remove Moore's commentary and edit in Alan Parry commentating on a Rocastle goal against Norwich City on 1st May 1989? The commentary on the night was all part of the moment. Brian Moore had the knack of finding the right words at the right time, just like at Anfield when Michael Thomas scored. For some reason the clowns at the official website treat supporters with utter contempt by doing things like this. It may seem like a small issue, but I'm fed up with these geeky fools and the way they fill their web content. To ruin Rocky's greatest contribution by over-dubbing the wrong commentary is sacrilege to me.

With Everton through to the FA Cup sixth round our fixture against them on Saturday-week is now postponed. I was pleased, as a shift worker, that the new date has been quickly announced so that we can make arrangements as necessary. Except the new date isn't set in stone. If Everton reach the semi-final of the Cup then the game will be played twenty-four hours later than planned. Why could it not just be set for that date in the first place? It's not just shift-workers that struggle. Anyone from Liverpool wanting to get to the game might have to re-arrange their signing-on day. By the same token, anyone wanting to get in early with their train booking and save a few quid are unable to do so until after Everton's FA Cup quarter-final. I just don't understand the need to mess us all about this way. It's hard enough to arrange yourself around football fixtures without the powers that be making it harder with decisions completely lacking in common sense.

The post I wrote yesterday got the predictable reaction from some of the mugs that follow Spurs. Apparently we're all scared of what they're about to achieve and we're a spent force and blah blah blah. We may well be a spent force, but their reactions merely confirm their obsession with beating us. What I wrote was tongue-in-cheek and was deliberately aimed at provoking a reaction. I can just see the taxi-driving cretins now, purple-faced with rage, as they hammered away at their keyboards mouthing "Gooner c***" under their breaths.
The importance of the game on Sunday is big in terms of finishing in the top four. As I've said here many times I don't care about the top four. It is a false achievement. You win nothing except the opportunity to lose to a better team every February and March. Obviously we want to finish as high up the table as possible, but "the top four" means just about nothing. As it happens, I think the winners of the game on Sunday will finish third in the Premier League, and may even have a shot at overcoming Man City. Personally I would take a draw right now. Spurs (Bale) are in great form and have found the way to get results from tight matches. We no longer have the players who have "been there and done it" in terms of Premier League success so it will be tougher to get a result at Tottenham than it's been in a long time. But I seem to remember thinking we were a busted flush ahead of the Derby this time last year. We all know what happened during and after that, don't we?
One more thing - why do Tottenham fans read this site? I know it appears on your NewsNow feed and on the media-watch page on Tottenham's official website, but that doesn't mean you have to click on it. I would never read a Spurs website as it doesn't interest me. Let's be honest, it's unlikely to say anything positive about Arsenal so why would I bother? I suppose it shows how desperate you all are.