Plenty of effort but not much quality 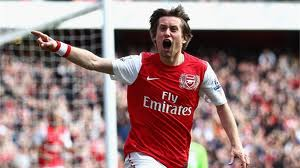 How we've missed the Little Mozart


I've always said I can handle Arsenal losing matches as long as the players put in the required effort. Last night was one such occasion. Given the personnel on show last night I thought it was a thoroughly decent performance in Athens. Unfortunately we were undone in the second-half, but a number of the players on show can be rightly proud of themselves. I was especially pleased with (and for) Sebastien Squillaci and Marouane Chamakh. Both of these players are much maligned, but they put in a real shift for the Club last night and deserve some credit for a change. I really wish Chamakh had been given some support on the field in the second-half as he was winning every header, but the disappointing (again) Oxlade-Chamberlain was not getting close enough to him. For me he has more than made a case to be in the match day squad between now and January, as genuine alternatives to Olivier Giroud simply do not exist.
Jernade Meade is getting some good reviews today and justifiably so. I thought he did really well when he came on at Reading the other week, and he stepped up a level last night pretty seamlessly. I see no reason why Meade should not now be understudy to Kieran Gibbs. We've seen Santos play and fail far too often, and I suspect his weight has a lot of do with his problems. We've also seen Thomas Vermaelen playing at left-back and looking utterly awful. Meade is 20 years old now so he should be part of things, otherwise he should be allowed to go and make a career elsewhere. His performance last night was in contrast to Carl Jenkinson who probably had his worst display of the year. It was a rare off night for the Corporal.
The main man in Athens was, of course, Tomas Rosicky. I fully understand why he was only involved for 45 minutes, almost using the game as a pre-season friendly for him. I expect him to lead the boys at Bradford next Tuesday. When he went off we lost all our ideas going forward. Andrey Arshavin did himself few favours when he came on, but I thought it was vindictive of Arsene Wenger to move Chamberlain in to the middle and force the Russian out wide again. The way Rosicky got us on the front foot in the first-half was a joy to watch. His first intention when taking the ball was to turn towards the opponents goal and he added pace to our play. I know that, apart from his excellent lay off for the goal, Gervinho was as frustrating in possession as ever, but the Ivorian looked so much more dangerous with Rosicky playing the ball out in front of him to get him running at the defenders. Two years ago Rosicky was somehow playing week in, week out but failing to be part of the game. His presence, ahead of Nicklas Bendtner, cost us the Carling Cup Final against Birmingham in my view. However, at the start of this year he became the player we first signed in 2006. That he picked up where he left off last night was more than encouraging. I would far rather have the consistency of Rosicky's performance (if only he can stay fit) ahead of the in and out form of Santi Cazorla.
Compare Rosicky's philosophy with that of Aaron Ramsey who simply does not that the speed to play effectively at this level. Ramsey turns back to his own goal  whenever he gets the bal because he doesn't have the pace to get us going forward. On the rare occasion he does pass the ball forward it is always played directly in to the feet of the player (if it reaches a team mate) which stops the momentum. I actually made a note that Ramsey was still going square and backwards with the ball in the 91st minute when we were 2-1 down. Shocking.
Even more shocking was the lack of action from the bench, as usual. I couldn't understand the point in taking off Jernade Meade. I don't accept Wenger's claim that the lad was tired - the fact is that substitutions at Wenger's Arsenal are made on seniority, and Meade was the most junior player in the side. On the bench was young Chuba Akpom, a 17 year-old striker who has been in goalscoring form this season. Surely, with him on the bench and the team losing, Wenger should have replaced Ramsey or Chamberlain (I certainly wouldn't have been taking off the outstanding Francis Coquelin) with this young unknown and got Chamakh some help up front? You would have to wonder just what scenario would have seen the lad getting on - he spent the entire second-half warming up on the touchline but was never given the chance to play.
As I said at the top I can handle losing when the effort is present from the players. That doesn't make it any less frustrating a defeat when the Manager hasn't done everything possible to get a result by helping those on the pitch. A win would have got us to the top of the group. There is an argument that it hardly matters given those in second place positions this season, but I'll remind people of that should we draw Barcelona on 20th December.
Posted by DvbrisG at Wednesday, December 05, 2012