Nothing wrong with an ugly win 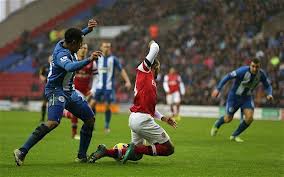 Not sure why they're arguing about this


I often say that as long as Arsenal win then I've had all the entertainment I require. Yesterday was one such day. The weather conditions and the fact that Wigan play on a rugby pitch meant it was always going to be totally different to the game at Reading last week. The Arsenal team was the same but I thought the way they went about winning the game in a very different way was encouraging. I notice we're not getting much credit for gaining a result from a difficult away fixture, but we're not Manchester United so there is no reason to hope for the media to heap praise upon the players.
The referee yesterday was generally very poor indeed. I don't understand why the FA persists with its belief that a man in his forties, who is at least a stone overweight, is a suitable person to referee a Premier League football match. Mr Moss was way out of his depth. As a result Jack Wilshere spent the first-half being kicked all over the pitch by McCarthy and co in the Wigan midfield. When Jack then made one of the best tackles you will see all season he was booked for it. Yet another of the joke FA policies is that you can't appeal yellow cards so Jack moves one closer to a suspension thanks to an incompetent idiot.
Jean Beausejour, who has to be one of the worst full-backs ever to play in the Premier League, clearly felt the only way he could stop Alex Oxlade-Chamberlain (what a return to form he's made in recent weeks) was by swiping his legs away. There was one incident in the first-half where Beausejour knocked himself off his feet by kicking wildly at the fresh-air recently vacated by the flying Ox. In the second-half he simply couldn't deal with Chamberlain as Arsenal took control.
I thought the Wigan fans, all three of them, were entertaining. Their chants of "England, England" at the travelling Gooners were utterly stupid given the respective number of Englishmen in each side. These big England fans then proceeded to boo English football's brightest young midfield talent whenever Jack Wilshere got hold of the ball. It's only an aside, but it's the sort of thing that sums up the mickey-mouse fans you get at mickey-mouse football clubs. They should stick to the rugby.
I heard the first five minutes of the second-half on Radio 5 as I was driving to work. Ex-Wigan boss Paul Jewell was the highly impartial co-commentator for the BBC. I can only assume that he and his colleagues were watching a different game in the first-half. According to them Arsenal had been a distant second before half-time. They were revelling in what they saw as Arsenal being outplayed. It showed to me how easy it is for radio to give a false impression to a listener who is not actually seeing things for themselves. As far as I was concerned Arsenal did just fine before half-time and had good opportunities early on. Wigan worked hard at closing Arsenal down, but that was about it apart form Kone missing his one-on-one with Szczesny.
I saw the rest of the game on my phone and I thought our goal was very much deserved. Beausejour had no answer to Oxlade-Chamberlain and we started to create again. When Walcott combined with Cazorla inside the box we got our reward with the penalty (Cazorla was back in his shell again yesterday but he played a Bergkamp type role with his only contribution when having a poor game). As soon as Walcott showed the nous (and strength) to get his body in front of Beausejour there was only one outcome. It was certainly clever play from Walcott but it was also a stick-on penalty. Arteta dispatched it and that's all that matters. Wigan may well have a gripe over the handball claim against Kieran Gibbs late on, and I have certainly seen penalties given in those circumstances. There is no reason to have your arms up like that. The worst thing a football will do is break your nose, but players are paid a lot of money to get hit by the ball. If a penalty had been given we couldn't have had too many complaints but for once we got the right end of a decision that could have gone either way.
After Arteta's goal we were on the back foot and Wojciech Szczesny was outstanding. He is another player who has showed signs of real form these past few weeks. Some of his saves yesterday were really first rate. As we started to struggle I thought Arsene Wenger just about got the subs right. I probably wouldn't have taken off Chamberlain as he was our attacking outlet, but Ramsey did okay when he came on. Francis Coquelin made a huge difference when he entered the fray and shored up midfield with some excellent tackling. Coquelin is having a fine season when he plays and should really have seen more action than he has.
There are people who will say that the last two wins are simply papering over the cracks in this Arsenal team. That is a valid point. However, I would far rather be papering over the cracks of a side that is in third place as I write rather than staring in to the deep chasms of a side falling in to the bottom half of the table.

Normally I would have had the mid-season review posted between the last game and Christmas itself. The fixtures have fallen in such a way that it hasn't been possible this year. I will do the mid-season piece later in the week, probably on Friday. There will be the annual festive Christmas Eve round-up tomorrow.