Get it done before January 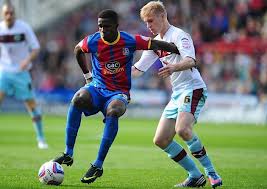 Zaha: If he's on the list then get him in

There is no blog tomorrow, despite my new internet connection, as it's the works Christmas do and I intend to be in the pub from lunchtime. My hangover on Saturday will probably dictate my presence at the game against West Brom. Hopefully, I'll be able to post a match review at some time on Saturday night. Here's to a confidence boosting win.
Posted by DvbrisG at Thursday, December 06, 2012