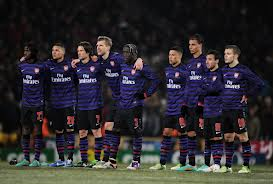 Shame faced, and so they should be


It has been the longest of weeks to be an Arsenal supporter. It's fair to say that the only people not revelling in our defeat at Bradford is us Gooners. After all, it's been 21 years since the press have had so much ammunition with which to fire shells at Arsenal. I suppose I should start at the beginning and go back to Valley Parade on Tuesday evening.
The Travel Club coaches didn't actually arrive at the ground until about 7.20pm which, given the temperature in Yorkshire, was no bad thing. While sat in the traffic outside the stadium we all heard the team and a collective sense of pleasant surprise went round the coach. Finally Arsene Wenger had decided that an actual trophy was rather more enjoyable than an imaginary one for finishing fourth. The only other time since 1997 (the first time a "shadow" Arsenal team played in the League Cup) that Wenger had put out the first team was in the Final in 2011 against Birmingham. I think we were all certain that the semi-final was in the bank, regardless of our recent failings. Given that the only other time was the defeat at Wembley I suppose we shouldn't be shocked at losing the other night. There's been plenty said all over the place about what happened but one simple fact is that Arsenal's players did not put in the necessary effort to beat Bradford City.
When I got in to the stand I looked at the white-topped pitch and said to my Dad that the game was looking a bit "York City". For ten minutes or so we dominated nicely with Vermaelen and Podolski both missing sitters with their heads. Then Bradford scored and remained the better side up until we equalised some 70-odd minutes later. There was no doubt that Bradford were well worth their win. Arsenal set up in their usual style and passed the ball to death while failing to create anything of note, bar that ridiculous miss by Gervinho on half-time. People get on at Gervinho and Ramsey, and rightly so, but Jack Wilshere was awful the other night until extra-time (even then he chose not to shoot when one-on-one with the goalkeeper) and continually gave the ball away when in possession. Francis Coquelin, the best Arsenal player by a country mile, was inexplicably withdrawn by the Manager shortly in to the second-half. Still we passed the ball relentlessly across the pitch until we eventually gave it away. When we did lose it we saw the ball pumped up to Bradford's number nine (I never did take note of his name) who was making mincemeat of Mertesacker and Vermaelen (how many free-kicks did he give away in wide areas the other night?) As time wore on nothing changed. As usual there was no attempt to mix up the side. Cazorla was looking dangerous from a deep-lying role, but Chamakh was so isolated up front that his hard work (you can't fault his work ethic) was for nothing. Of course we got an undeserved equaliser and you thought maybe we would get out of jail. The Bantams deservedly rode their luck in extra-time and got to penalties.
At this point I have to give Chamakh credit for having the balls to step up. Given that he has not played and gets such stick when he does appear it showed a lot of guts to stick his hand in the air and want a penalty. I suppose he was never likely to actually score, but I was pleased to see a centre-forward putting himself in the firing line. Where, for example, was Tomas Rosicky?
After the game I didn't even feel angry. I think that stage has long since gone for a lot of Gooners. In years to come being there the other night might become a badge of honour. I can see it now, when the youngsters are moaning about a defeat to a team like Ipswich or something, and I say to them "You think this is bad? I went to Bradford!"

Before the game, when we heard the team, my Dad said to me that if we lost then Wenger would surely have to be sacked. The point being that Wenger's first-team would have failed to beat a fourth division side. Of course the sacking was never likely to be forthcoming, but that's not to say that it shouldn't have been. I certainly didn't hear anyone on our coach arguing with others who were calling for his head. In fact I think everyone seemed to be of the same opinion - things will not improve until he is no longer Arsenal Manager. Losing a few Premier League games to perceived minnows is one thing, but being outplayed by a fourth division side was a new and humiliating low. It is beyond my comprehension how anyone can defend what is going on. You can blame the Board, you can blame Stan Kroenke, but only one man puts unmotivated players on the pitch with no tactics whatsoever. Bradford's skipper claims they had a tougher game against Torquay last week which is obviously nonsense. However, when you consider the fact that Arsenal always play the same way you can sort of understand what he's talking about. Did Wenger honestly not think it might have been an idea to switch to 4-4-2 or something at some point, just to put the opposition centre-halves under a bit of pressure? Did he not realise that Ramsey is a waste of space on the right-wing, or that Gervinho will never be a centre-forward? Why did Chamberlain and Rosicky not start the game so that we could use what little pace was available to us from the off? As I said, you can pick fault with everyone you want, but only Arsene Wenger picks and signs the players. That is why he should be removed from his position.

For all that I want Wenger to go I can not sit here and not have a pop at that t****r Stewart Robson. This bitter fool, how has recently been sacked from his job at Arsenal, has claimed that Arsene Wenger "knows nothing about coaching". Now let's be honest here, I think it's fair to say that Arsene Wenger's record as a coach is fairly good. Okay he seems to have a problem with defence, but how can anyone say he knows nothing about coaching? This is the man who developed Thierry Henry, George Weah and Patrick Vieira in to the best players of their generations in their positions. Robson is a p***k of the highest order and pretty much always has been. His behaviour this week was opportunistic and disgusting. It was all about self-publicity in an attempt to bring himself to the attention of the national press and Sky Sports. Robson is after a job and he clearly calculated that saying something so controversial would be great in a "gissa job" kind of way. The thing that summed him up was the caption Sky Sports used for him - "Stewart Robson - Arsenal 1981-86". Given the dates of his Arsenal career I suppose he's well qualified to comment on what it's like to part of a crap Arsenal team. In my lifetime they don't come much worse than that mob.
Robson is clearly the thinking man's cretin. His views are in stark contrast to those of Ray Parlour who defended Wenger against Robson's criticisms. As I'm typing this I'm watching Soccer AM from this morning, where John Lukic has been an excellent and erudite guest. Listening to Parlour and Lukic you get to see who the real Arsenal men are. Fans can have a go all we like - we pay the wages, but former players should always close ranks. It's noticeable that two players from the George Graham era, who played under Wenger, have chosen to be "Arsenal" above all else.

Finally today, in something of a departure from the norm, I'm going to defend Arsene Wenger. Yesterday in The Sun their sports editor, the cretinous Steven Howard, accused Wenger of saddling Arsenal with some of our worst ever players. His piece was illustrated with some pictures of Arsenal players, including Andrey Arshavin. Seriously, he was rating the Russian as one of our worst ever. Howard has made Wenger slagging a weekly sport in his column this past two or three years. He clearly has some kind of personal grudge with Le Boss and should have been banned, along with his newspaper, from all things Arsenal a long time ago. The man also considers himself an expert on other sport including cricket, golf, rugby, boxing, F1, cycling and even darts and snooker (not strictly sports but you get the picture). Well, this week, we have had an extra dose of Howard. Today he has written another anti-Wenger column having seemingly attended his press conference yesterday morning. The best part of today's nonsense comes in the sixth paragraph, "Wenger was in a surprisingly good mood considering he was faced with some of his fiercest critics." Arsene admitted the other week that he does read the papers, and I hope he had a good laugh at that today. Why on Earth should a newspaper journalist consider himself one of Arsene's fiercest critics? Who the f**k do these w*****s think they are? As an Arsenal supporter I have the right to be critical of Arsene Wenger. I actually know a lot less about the game than Wenger does, of course. But as a fan of Arsenal I know a lot more than some numpty who writes for the newspapers. For Howard to have the arrogance to think that Arsene Wenger would give tuppence for his opinion of him (he doesn't care about our opinions and we pay his wages!) just about sums up this idiot. I'd love to meet Howard and tell him what I think of him. Let's be honest, it's bad enough hearing Hansen and Shearer, or Jamie Redknapp, having a pop at Wenger but at least they played the game at the very top level. Who did Steven Howard play for? Probably his Polytechnic 5th XI. W****r.
Posted by DvbrisG at Saturday, December 15, 2012