Entertainment, Let the madness be ignored 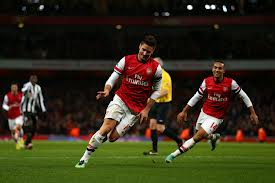 
At 3-3 (and regardless of whether Arsenal won the game) I was all set to complain about how our awful defending will cost us dear come the end of the season. However, when you go on to score seven and produce such an incredible display of attacking football it would be churlish to bang on about the way we failed to protect our goal. All I will say about that is that Jack Wilshere turning his back on the free-kick was awful (had he been listening to Ferguson?) and Sagna had a terrible game from start to finish. Also Kieran Gibbs was badly at fault for the third equaliser (though not for the second as ESPN and their commentators would have you believe - why are these people incapable of actually analysing the play?) Szczesny had another very decent game and could do nothing about the goals Arsenal conceded.
What about that second-half going forward? I felt the first-half was a return to the slow and sideways rubbish that has dominated the season. However, I'm informed by people who were actually there, and not watching on TV like myself, that the feeling in the stadium was quite different. As much as I felt we didn't play so well in the first-half I certainly didn't go along with Chris Waddle claiming that Newcastle had "dominated" the game. This man is being paid to give an "expert" view on the game yet he fails to see that almost all the chances had been Arsenal's (more on the commentary team below). The football Arsenal played after half-time was devastating. Right from the kick-off there appeared more urgency, especially when closing down the opposition. The pace of Walcott and Chamberlain was too much for Newcastle's defence. I speculated in the preview piece that their exertions at Old Trafford might have an effect and so it proved in the last twenty minutes. Having said that you still have to take advantage and Arsenal were ruthless for a change. I don't know why Ramsey was brought on to play on the left-wing, and I thought Coquelin should have been introduced earlier, but those are small gripes on such a day.
Theo Walcott has predictably grabbed the headlines for his super performance. With better decisions from Theo we might have had double figures but a hat-trick and two assists is more than enough I would say. Obviously the usual talk about his future and his contract etc came to the fore. My view has been recorded a few times on this site so I won't go over it again. What I will say is that I am becoming increasingly impressed with Walcott's combination with Olivier Giroud. Robin Van Persie was always quick last season to recognise the contribution Theo was making to his golden year. Giroud is the main benficiary of Walcott's supply this time around. The cross for Giroud's first goal was the best I've seen from an Arsenal player in many a year, perhaps since Anders Limpar was picking out Alan Smith. Giroud was incredibly unlucky not to have got his own hat-trick as he saw what would have been Arsenal's eigth goal come back off the bar. As it happened Walcott did get a hat-trick of course. His first goal was reminiscent of the trademark Thierry Henry finish across the goalkeeper, the second showing a newly found calmness under pressure (a confident Theo is a dangerous Theo) while his third showed skill and determination. I have often considered Walcott to be easy to defend against when faced up one on one as he usually runs in straight lines. For the third goal, however, he shimmied and side-stepped and moved the ball around the defenders. What should have been a certain penalty (though I'm really not sure Foy was giving it) turned in to the best finish we'll see from an Arsenal player this season. Simply a stunning individual goal to cap a great game.
Watching on TV is never a nice experience, especially for home games, and even more especially on ESPN. This week we were subjected to John Champion and Chris Waddle. Arsenal supporters have been subjected to many a biased commentary over the years, but these two were pushing for the top prize on Saturday evening. Leaving aside the fact that Waddle can't actually speak English his anti-Arsenal views are tiresome in the extreme. You got the impression on Saturday that every piece of good play by Theo Walcott was like a knife twisting in Waddle's stomach. I swear he was actually crying when Theo got his hat-trick. After all, no public figure (not even Alan Hansen) has been quite so vitriolic in their criticism of Walcott. The thing that Waddle needs to remember is that his own career saw him win nothing without bribes from his Chairman. His hatred of Arsenal no doubt stems not just from his association with Spurs but also to the fact that we ended his dreams of a trophy in England in two Final's in 1993. What we also heard on ESPN the other day was the habitual love for the Newcastle supporters. Apparently they are "great" fans. John Champion kept wanting to tell us. He also kept telling us how quiet it was at the ground. When the Gooners got behind the team after half-time he ridiculed them. The fact is that all the big Club's play to quiet stadia unless their winning. Believe it or not the "great" fans do not create an atmosphere at St James' Park unless they're on top (a lot of them have gone back to not turning up, such is the poor form of the side this season). Incidentally, I would like to point out that the "great" fans actually only bought up half their allocation of tickets for Saturday and Arsenal sold the remainder to home supporters. In short, Champion and Waddle are a couple of cretins.

Today is New Years Eve. That means the transfer window opens tomorrow. I really hope Arsenal are busy, with both ins and outs from the Club. We know where we need more players and better players, and we know who we need to get rid of (that idiot Collymore claimed that Tomas Rosicky "must" be sold by Arsenal in one of the papers yesterday - another cretin is Collymore). There will now be the usual "speculation" about who will be signing for whom etc. The press call it speculation, I call it utter b******s. I will be adopting the usual policy of ignoring the nonsense and only commenting if a transfer looks like being a sure thing, or if it actually happens. If you want to go in for all that rubbish then be my guest, but you won't get your fix of it on this site. I hope that, come January 31st (preferably sooner) we have brought in an experienced goalkeeper, a physically strong midfield player and a couple of strikers. I hope we've got rid of a number of players on a permanent basis. Most of it won't happen, so I'll try not to lose sleep over it, though that won't be as easy as ignoring the b******s.

I don't go in for the whole New Year celebration thing. It's not my idea of something to celebrate but each to their own. That being the case I'll wish you a Happy New Year and I look forward to Arsenal getting some tangible success in 2013. Here's to a trophy come May.