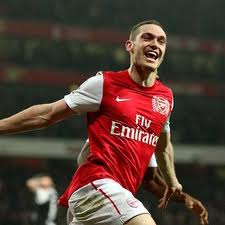 
I'm not going to the match today. As I told you yesterday my children have both been ill all week and I'd decided I was going to stay at home even before this mornings latest vomiting episode. As such my nephew will be getting a day out on my ticket and I hope the boys can give him a win to celebrate as they bring down the curtain on 2012. I will have to make do with ESPN but if Waddle or Burley are on I'll probably watch it with the sound down.
I have to say that the fixture computer has got things seriously wrong this season with its Christmas fixtures. First of all it's ridiculous that Newcastle are having to travel to London for a late kick-off during the Holidays. It's also ridiculous that teams have been given two home or two away games to play during this week. It's not fair on the players and it certainly isn't fair on the paying punters. Its time the FA sorted out this kind of nonsense.
The team news sees Olivier Giroud and Tomas Rosicky returning to the squad following illness last week. Arsenal's players should certainly be fresh having had the whole week to recover since winning at Wigan. Newcastle, meanwhile, had a tough game at Manchester United and were maybe unfortunate not to get anything out of the match. I hope it was gruelling enough to have left their players heavy legged for their trip to North London. It will be interesting to see if Theo Walcott continues up front or whether a refreshed Giroud will be preferred. Personally, as ever, I would like to see us playing two men up front at home. You could see in the second half on Wednesday how Man Utd gave Newcastle trouble with two men through the centre. I really don't see Walcott being physical enough against two big centre-backs, but put the aerially dominant Giroud up there with him and it's a different prospect.
I don't really see too many changes being made to Arsenal's winning team. Apart from my wish for the two up front I don't much see the need to change. As I said, the players should be fit and raring to go this afternoon. There is absolutely no reason why Arsenal should not be dominating a struggling Newcastle. Obviously Demba Ba can cause us problems, as can Papiss Cisse and the two Ameobi's, but Arsenal should be able to dominate possession to such an extent that they become a sideshow. Obviously we know that Arsenal will not dominate quite so much as that.
Last season saw a tough game when we met Newcastle at home. Tim Krul started his time wasting in the first minute and carried on unpunished until injury-time. Robin Van Persie ended up in a running verbal battle with his fellow Dutchman until Thomas Vermaelen rammed home a close-range winner in injury-time and the feud turned physical. I hope we have a stronger referee this afternoon as Pardew is sure to send out his side with the same tactics to spoil and annoy. As long as we end up with another win I don't much care - there's something rather special about a last minute winner from Thomas Vermaelen.
Posted by DvbrisG at Saturday, December 29, 2012