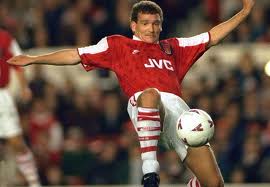 John Jensen - I was there


The last time I remember going to football on New Years Eve we played against QPR. Here we are, seventeen years later, getting ready to face the same opponents on the same day of the year. That game back in 1994 has passed in to Arsenal folklore as it saw the first, and only, goal scored by John Jensen for Arsenal. The fact that we would go on to lose the game 3-1 was almost ignored by most of us because of Jensen's strike. Perhaps it was a sign of how badly the team was playing that season that we should try to cling to something which, basically, summed up how poor our midfield was in an attacking sense. I was a fan of Jensen, and I still am. JJ was a whole-hearted destroyer in the centre of midfield. Unfortunately for him his arrival came at the same time as David Rocastle's departure. A replacement for Rocky he was not, but he went on to become a cult figure with the crowd. Somewhere I still have the t-shirt saying that "I was there when John Jensen scored." I suppose it's one of the more surreal moments in my Arsenal watching life, but memorable nonetheless.
As for the game tomorrow we will see Theo Walcott returning to the side. He will be up against Armand Traore, it would seem. I hope Traore performs as well as he did in his final appearance  for Arsenal at Old Trafford. He seems to have played almost every game for QPR since he went there, so I assume he must have done okay for them. Theo should be fresh after a ten day break, and he ought to be relishing the chance to get out there against Traore.
Elsewhere I can see some more rotation of the players in midfield. I think that Arteta will be benched for either tomorrow, or Mondays' game at Fulham. Arsene certainly won't want someone in such a crucial position to have to play three times in seven days. I think we'll see Aaron Ramsey coming back in tomorrow, but the versatility of Rosicky and Benayoun could see either of them keeping their place. Other changes could mean a start for Arshavin, Coquelin or Oxlade-Chamberlain. There may also be a case to rest Robin Van Persie ahead of the game on Monday, but I doubt the skipper would be overly impressed in the circumstances. Nor would the crowd, come to that.
QPR have done pretty well since they got promoted. I imagine their supporters were resigned to a very long season when they were destroyed at home by Bolton on the opening day. Like most I'm not a fan of Neil Warnock, but you can be sure his team's will fight for everything. They have some combative players in the midfield, but also some skill with Taarabt. Up front I think it's fair to say that Helgusson has surprised most of us with his goalscoring at this level so far. His goals are the reason QPR are doing as well as they are. Mertesacker and Koscielny, assuming they both play again, will not have an easy ride tomorrow afternoon.
After the disappointing outcome on Tuesday the three points are even more crucial tomorrow. Our home form has actually been not too good in the past month, where a lack of goals has been a thorn in our side - bear in mind that it took a Robin Van Persie stunner to beat Everton early in December. It's a problem that must be thrown aside, and quickly, if we are to keep challenging for the important positions in the Premier League. A failure to win our next two games could render Thierry Henry's arrival academic, and that would be no good to us.