Still some dead wood around 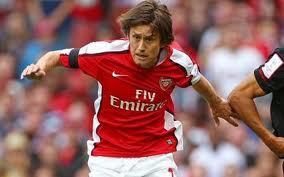 
One of the best things about the Summer changes was the sight of certain players finally being shown the exit door. Three of those players actually still belong to us - Denilson, Vela and Bendtner. However, I would be pretty amazed if any of these ever wear Arsenal red and white again. The problem Arsenal have had is that this trio are all being paid an inordinate sum in weekly wages. We can only speculate as to how much Arsenal are still paying each week for these players, even though they are playing elsewhere on loan. The departures of those three has allowed Coquelin and Frimpong to emerge as genuine competition to Alex Song in midfield, while Benik Afobe would also have benefited from the leaving of Bendtner and Vela had he not picked up a serious injury on the eve of the season (I suspect Ju Young Park would not be an Arsenal player had Afobe stayed fit).
Despite the mass clear-out, there remains some dead wood around the place, picking up a wage but not being part of things. I am, largely, talking about Sebastien Squillaci and Manuel Almunia. The case of Squillaci is surely one that can be concluded in January (depending on how much Arsenal are paying the man) as he is now the sixth choice centre-back at the Club, behind Vermaelen, Mertesacker, Koscielny, Djourou, and Miquel. This does none of us any favours, least of all the experienced Squillaci who could probably do without seeing out the last couple of years of his career playing very occasional Reserve games for Arsenal. Almunia, meanwhile, is a victim of the misplaced faith shown in him by Arsene Wenger. I believe that Manuel is still the second best goalkeeper at Arsenal, and he is a fine number two in normal circumstances. However, his situation is coloured by his past as an inappropriate first-choice 'keeper whose confidence, and standing with a large number of supporters, has been taken to such a low level that his presence in the team would cause panic on all sides. That is a shame, as the improvement in Almunia as a player since he arrived at Arsenal is immense. His treatment from the Manager over the past six months is criminal, and Wenger was forced to recall him on Saturday due to injury to the two clowns who currently sit above him, but behind Szczesny, in the pecking order. I'd like to have been a fly on the wall as Wenger had to go and ask Almunia to be part of things again after the defeat in Athens. The point I am making so laboriously is that there are at least two spaces to be created (I would be happy with any, or all, of the understudy goalkeepers being sold) in the squad (one would need to be replaced - step forward Steve Harper as our new number two goalkeeper, please - and one wouldn't). Such space could then be filled with other experienced signings.
Along with those who are never/rarely involved are people like Tomas Rosicky who are neither here, nor there. Last season Rosicky was involved far too often as he simply couldn't find anything like his form. This season he played really well on more than one occasion, only to not get a look in when the likes of Ramsey clearly needed a break. The departure of a player like Tomas would see Alex Oxlade-Chamberlain moving up the pecking order, and not before time. If Arshavin was also to join a January exodus then a fit and firing Ryo Miyaichi could be the shock of the second-half of the season - his lightning pace could scare the life out of tired opposition full-backs as the season nears its end come April and May.
All such musings are merely pie in the sky with regards to what Arsenal will do in the real World, but I wouldn't complain too much if such events unfolded.
Posted by DvbrisG at Wednesday, December 14, 2011