Olympiacos 3 - 1 Arsenal review, Something for the Leeds United fans 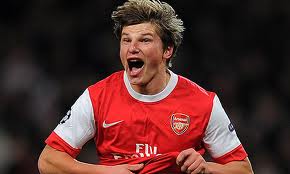 Arshavin - no more chances, get rid


Last night was supposed to be a game of no importance whatsoever. The result, disappointing though it was, remains inconsequential. However, Arsenal may be feeling the effects of the defeat in Athens for a few weeks to come. I really can't understand why Vermaelen and Santos were selected to play last night. I was convinced the back four was going to be Yennaris, Squillaci, Djourou and Miquel. There was no need for any of the first-choice players to start that match. You just knew that one of the pair would be injured, and so it has come to pass. With only one fit full-back in the first-team squad it was imperative, surely, that Andre Santos should be wrapped in cotton-wool. From what we've been told this morning it seems that Thomas Vermaelen will have to move to left-back for the foreseeable future. This will weaken the defence as a whole. I know Vermaelen has played there regularly throughout his career, but when he's played there for Arsenal he has looked all at sea. We will also badly miss his influence in the centre of the defence.
The game itself probably got the right result in terms of the performance from both teams. Having said that we should have been two goals up before they scored, with Arshavin and Chamakh both wasting clear opportunities to put Arsenal ahead. Arshavin then lost the ball in midfield and Squillaci and Djourou got unlucky as the Greeks went ahead. However, the defence was awful from the start, with Squillaci quickly erasing the memory of his good performance against Manchester City.
Shortly before we lost Fabianski I was thinking to myself that the best thing that could happen would be for him to go off with an injury. I suppose it shows just what I know about football. Vito Mannone did well to come and win a header on the edge of the Arsenal area, but his second attempt to clear would have been hilarious had it happened to someone not playing for us. After that the big Italian looked nervous pretty much every time the ball went near him, though those in the back-four did little to protect him (especially Djourou and Squillaci).
The main villain for me last night was Andrey Arshavin. I can not abide a player who does not try. Marouane Chamakh may have been poor (again) last night, but at least he gives it everything. Arshavin has become a waste of space over the past eighteen months, and January must see the end of his Arsenal career. I do not want to see him in an Arsenal shirt again. He was playing in his preferred position last night so there are no more excuses available. Arshavin's time at Arsenal got off to a wonderful start. We know how good he really is. But he is lazy and not committed. He must now be sold.
As I said earlier, the result didn't matter much. I felt the three younger players (and there were only three starting the game, despite Tony Gale and Bill Leslie's repeated references to the "young team" who "must learn" - close to cretinism) all did well. Oxlade-Chamberlain was great on the ball again, while Frimpong and Coquelin ran all night in midfield. Tony Gale seems to dislike Frimpong for some reason and continually slagged the boy - I somehow suspect Frimpong may go on to have more success than Gale could have dreamed of as a player. Next up is a stern Premier League test at home to Everton.


At the top of the page you will see that I describe the site as being "for Arsenal fans, and football fans in general." As such I hope the Gooners reading this will indulge me as I mention a man who I have come to despise over the years. The man is Peter Ridsdale, former Chairman of Leeds United, Barnsley, Cardiff City and Plymouth Argyle. All four of these Club's have something in common, apart from (but very much linked to) Ridsdale - they have gone in to financial meltdown at his hands. Now, having overseen what will surely be the ultimate disappearance of Plymouth Argyle, Ridsdale has been made Chairman of Preston North End.
What happened to Leeds United is well documented. Now, I have no more time for Leeds than the next man, but I can recognise that a big Club like that shouldn't have fallen to where it did. The only reason for Leeds free-fall was Ridsdale's profligacy with their money. Seth Johnson, for example, was paid around £15,000 more per week than he and his agent had planned to ask for. Throughout all the time that Leeds were riding high Ridsdale was a regular face on TV as he attempted to make himself the public figurehead of the Club. When it all started to go wrong he was suddenly nowhere to be seen. The same has happened at every Club he has been to.
I watched an interview with Ridsdale on Sky last night where he spoke of how "I" had been successful at Leeds, and how "I" had overseen five top-five finishes in the Premier League, and how the financial meltdown at Elland Road had "only occurred after I left." This guy really should be on the cretin list. My mate Doug (from Leeds) texted me last night and said "...if he ran supermarkets even Iceland's wouldn't touch him." And that sums up Ridsdale for me. Yet, for some reason he is still in football. What exactly do Club's see in the man? And why, having overseen the bankrupting of four different football Club's, has the FA not banned Peter Ridsdale from football? It is a shocking dereliction of duty from the ruling body.