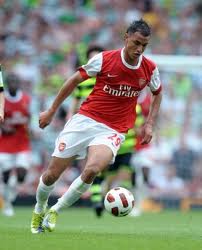 Chamakh - in line for a start tomorrow


I didn't make it to the game yesterday as planned. I woke up with a horrible cold and, with a return to work today, I didn't fancy three hours out in the cold London air and the knock-on effect it may have had. As a result my six-year-old got a bonus day out with Grandad and his Uncle's and the chance to see Tony Adams in the flesh, albeit from the other side of the ground. Despite not being at the game I did get to watch it in full by going to one of the local pubs and nursing an orange-juice throughout the game.
The match itself followed the all too familiar pattern of Arsenal dominance without really getting close to doing a lot of damage. Van Persie missed a couple of very presentable chances in the first-half (with better finishing and better refereeing in recent matches he would have destroyed Shearer's record) and Ramsey's superb volley was cleared off the line by Barton. Yet again we saw Barton making a terrible tackle on one of our players, and somehow escaping with a yellow card. Will Martin Atkinson be asked to explain why he booked Barton instead of sending him off? Of course not - he'll get rewarded instead with a top of the table clash next time he does a Premier League game.
The second-half, I thought, saw QPR start much better than Arsenal. Wright-Phillips looked to be a danger in the first ten minutes after half-time but, ironically, faded when Vermaelen went off injured. Perhaps the Belgian was carrying that knock for a while yesterday. Gradually we got back at it. I have always considered Theo Walcott's finishing to be his strong-point but, in the past couple of months, he has been woeful when faced with chances to score. His miss yesterday was embarrassing to say the least. It capped a poor performance - Gervinho's introduction showed exactly how much we had missed some direct running out wide, though his finishing is also woeful.
The goal came from some good pressure in midfield, before Arshavin produced his only telling contribution to Arsenal in the past three months. The pass from the little Russian was perfect, which makes his lazy demeanour and lack of application all the more galling. RVP was never going to miss that one and provided the big finish.
I've seen Warnock's contribution to Match Of The Day from last night, and how the man chose to embarrass himself. What exactly was he talking about? If he genuinely thinks Robin Van Persie is constantly fouling and cheating then he really is a complete bonehead. I've never liked Warnock, who always seems to want to be portrayed as the poor, hard done by, innocent party. The fact is that he is an odious fool who does his Club's no favours with this particular routine. He probably belongs on the Cretin List.

It being this time of the year the games continue to come thick and fast. Tomorrow evening the boys are in action against Fulham. I fully expect changes to be made. I was quite surprised at yesterday's starting line-up, and I can't believe Arsene will not be rotating tomorrow. I am concerned that the same mistakes will be made tomorrow, as were last season at Wigan. You might recall that Wenger changed most of the team following the home win over Chelsea, and it ended up costing us two points at the JJB.
Among those likely to get a game from the off is Marouane Chamakh. Personally I would rather see Van Persie continue to play - he has the best part of two weeks off after tomorrow as he won't be involved against Leeds - and try to get the job done. If RVP was to start, and we could get a performance going, with some goals thrown in, then he can be withdrawn early. If Chamakh starts, and Wenger is forced to bring on Robin to chase the game, he will have to sprint around far more which could easily lead to injury.
The midfield may also see changes. I would be shocked if Gervinho didn't start in place of either Walcott or Arshavin, while Rosicky, Chamberlain and Benayoun will all be fancying their chances of getting a game. There is little room for change at the back, but Miquel or Coquelin are likely to fill in at left-back in the absence of Vermaelen.
Fulham continue to struggle, and I hope that continues tomorrow. Zamora and Johnson have been left out of late but, after the way Zamora performed against us a few weeks ago, I wouldn't be surprised to see him get a game tomorrow. Clint Dempsey is a player I really rate, and he has carried them at times in an attacking sense this season - Arsenal will have to be on their guard against the American.
All in all it's another crucial game. A win will keep us up in the hunt. Results yesterday very much went our way (and today too with Man City losing). We need another win to put pressure on those above (and directly below) us. Who knows, get on a good run over the next eight weeks, which include home games with Man Utd and Tottenham, and anything might yet still be possible.