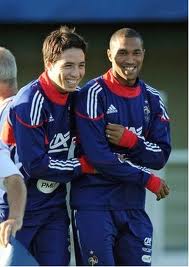 No Clichy tomorrow, and Nasri will be counting his cash


If somebody had told me four years ago that we would be visiting a Manchester City team at the top of the Premier League, in the week before Christmas, this season I would have told them they know nothing about football. However, modern football, fuelled by astronomical money, has seen the likes of City catapulted in to the elite. Actually, I don't begrudge the City fans some success. I have no time for the way that money has seen them come to the fore, but it should be noted that Man City were still getting big crowds to watch them when they were playing two league's below the top flight. It's fair to say that their backing is not so artificial as that on the other side of Manchester. Real supporters, I would suggest.
The game itself sees Arsenal very much as second favourites. I haven't seen any of the pundits backing Arsenal to get a result, though Mark Lawrenson's prediction is ridiculous. Given the fact that Manchester City haven't kept a clean sheet since Jesus was a boy, his prediction of 2-0 to City is nonsense. I'm not saying that Arsenal will definitely score, but to predict a clean sheet for City, against a team with Robin Van Persie in it, shows a genuine crassness from Lawrenson. What is certain is that last season's 3-0 win for Arsenal seems unlikely to be repeated. For what it's worth I think Arsenal can beat City, especially after their loss at Chelsea on Monday - there is no telling how a team will react to defeat after a long unbeaten run (we should know, after all).
As now seems traditional there will be some added spice from the fact that a despised ex-Arsenal player may be involved for the hosts. Adebayor may not be present anymore, but he has been replaced by the equally greedy and reprehensible Samir Nasri. The odious little fool got some stick at the Carling Cup game a few weeks back, and the travelling Gooners will be making themselves heard tomorrow, you can have no doubt. Nasri claims he left Arsenal through ambition, but he spends a serious amount of time on the bench. I am fairly certain that, had he still been at Arsenal, then such bench time would have surely met with complaint from him. It's amazing what £120,000 every week can do to soften such pain.
Both teams have some problems defensively tomorrow with injury. It seems that Zabaletta will be moved to left-back in place of Clichy and Kolarov (Clichy's absence is a blow to Arsenal's hopes down that side of the pitch). Theo Walcott can expect some bruises come Monday morning as a result of this change. Robin Van Persie will certainly fancy his chances against Joleon Lescott, while Gervinho will have to help Vermaelen out if Micah Richards plays at right-back (though his bursts forward could leave massive space for our Ivorian to exploit).
Going forward City are exceptional. I tipped David Silva to be the Footballer of the Year at the start of the season, and only Robin Van Persie stands in his way for that award. The Spaniard's form in his second season in England reminds me a lot of Robert Pires, and his influence on his team is as important as Robert's was in 2001-02. They have an array of attacking talent, and I fear that Aguero may have too much for our central defenders. Having said that Koscielny has been in the most superb form for the past couple of months, and I think Mertesacker might just put in a big performance tomorrow and come of age in English football (if he would just jump a bit more often he would be fine).
The major problem for Arsenal is in midfield. We know that De Jong will kick anything that moves, so Aaron Ramsey will be another wounded man after the game. Alex Song will need all his physical attributes to deal with Yaya Toure, as well as needing to contribute going forward again. Mikel Arteta is another man who owes us a bit of a performance. I can't understand how someone famed for his creativity can appear so negative whenever he gets possession in midfield - it's time to deliver.
A win for Arsenal tomorrow could set us up for a very good second half of the season. With a tough Christmas schedule ahead it would seem imperative to go in to it having avoided defeat against the League leaders. A second defeat in a week for City, meanwhile, could see them in a bit of a panic over the festive season.
I have to work until around 5.30 tomorrow, so the Sky+ will be in operation again, and I'll be watching it "as live" when I get home. I'll get a match review done at some time tomorrow night, or on Monday morning.
Posted by DvbrisG at Saturday, December 17, 2011