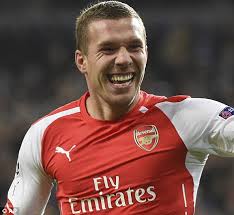 A smile you'll never forget
One of my favourite Arsenal players of recent years has finally left us on a permanent basis. The fact that we have done business with Galatasaray again irks me greatly as it does any time we have contact with them that isn't forced by UEFA. I liked everything about Lukas Podolski at Arsenal. Quite apart from an impressive goal scoring record he represents something about the modern Arsenal, post-Highbury, that might easily be overlooked. What am I talking about? After years of signing blokes we'd never heard of, or blokes who just weren't very good, or over-paying (not to mention over-playing) people like Denilson and Eboue, we went out and signed a German superstar at the peak of his career. The signing of Lukas Podolski, though it would end up overshadowed by the unexpected  departure of Robin Van Persie, marked the end of Arsenal austerity and signalled the start of our brave new World. That he never got to hit the heights we might have expected was more about our method on the pitch than it was about Poldi's ability.
The writing was on the wall for Podolski from the day he made his debut (not his two goal opening bow in pre-season back at Cologne) at home to Sunderland. With Van Stapleton gone in that week he was put up front on his own. He was later substituted and would rarely play up front for Arsenal ever again as Wenger immediately lost faith in him up top. Podolski would continue to be in the side (at least until he was inevitably substituted) playing off the left. It is to his immense credit that he kept up a fine goal scoring rate despite being constantly played out of position.
I will always believe that Poldi would have been mega for Arsenal had he been played up front alongside Giroud. On the two occasions that Wenger actually switched to two strikers (in the FA Cup semi-final and Final of 2014) Podolski had been taken off so that Sanogo could come on and play there instead. I never understood why Wenger wouldn't use Podolski where he would have been most effective, despite constantly going on about his prowess as a finisher. In short Wenger never got the best we could have had from Lukas Podolski.
Towards the end Podolski became more famous for his social media output than he was for playing for Arsenal. After all, he spent most of his time sitting on the bench with not much chance of getting on. He was actually treated abysmally by the Manager, along with Tomas Rosicky, and it was no surprise to see him go away to Inter Milan in January. I think his performance against Southampton in the League Cup last season marked the end of him at Arsenal in that he failed to make any impression whatsoever - he didn't look like a bloke determined to prove the Manager wrong. But following that he would win us three important points in the Champions League at Anderlecht, and then score twice in Istanbul in what turned out really to be his final hurrah as an Arsenal player.
I will remember Lukas Podolski very fondly at Arsenal. He scored good goals and important goals. He always seemed to be loving it at our Club. He simply seemed to understand how to appeal to the supporters. I wish we'd got to see the best of him more than we did, but I'll hold dear some of the fiercest strikes of a football you'll ever see. Thanks Poldi. 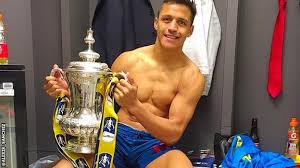 Alexis Sanchez cemented his place as a national hero in Chile last night with the winning penalty against Argentina in the Copa America Final. I might be wrong but I thought he mis-kicked his penalty a bit, but who cares? The little man has been brilliant for Arsenal this season and provided one of THE great moments with his goal in the FA Cup Final. It's great that he's rounded things off on such a high in front of an adoring home support. I want him to get a proper rest now and come back fresh for the season ahead - Arsenal need him fit and firing when he comes back. He will miss the Charity Shield as Arsene has already said he should have at least four weeks off, but that doesn't matter as long as he's ready to play as many Premier League games as possible. Well done Alexis.
Pre-season training starts tomorrow for a number of the first-team. All those that weren't involved in the end of season international matches are back tomorrow in preparation for the trip to Singapore. I'll write a bit about the pre-season tomorrow evening after Arsenal have published some nice photos of sweaty men starting to get back to football.
Posted by DvbrisG at Sunday, July 05, 2015