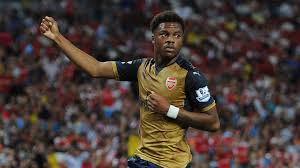 After the fun of the away kit launch yesterday (the highlight of which was Olivier Giroud being caught on camera telling his mates to "f***-off" for laughing at his hair) it was down to some small semblance of business this afternoon for Arsenal. It was always going to be a reasonably comfortable stroll for us, regardless of who was selected for the game, and so it proved. Having been at work today I've just watched the whole game back and was more than happy with what I saw.
Arsenal looked resplendent in the new gold away shirts (I actually quite like this latest PUMA effort - if it isn't yellow then it may as well be gold) and played some decent stuff on occasions. The oppressive heat obviously meant there wasn't a great deal of pace in the game but there was the odd moment from Oxlade-Chamberlain and the impressive Alex Iwobi that saw Arsenal leap in to action occasionally. That two of the goals came from the penalty spot shouldn't detract from the positives for Arsenal.
The headline grabber will be Chuba Akpom and that is only right. The young striker has an impressive goal scoring record in the youth teams these past couple of years and has been banging down the door of the first-team squad for a while. He made a couple of brief substitute appearances in the early part of this year before finishing the season out on loan. Today he very much took his chance when it came along with a good hat-trick. The first goal was an opportunistic strikers goal that he hit first time when the ball bounced his way. The second was a really well taken penalty, and the third a header from a perfect cross by Hector Bellerin (there was a fantastic drag-back by Bellerin just before he crossed the ball too). With Danny Welbeck, Theo Walcott and Olivier Giroud all in front of him Akpom very much needs to catch the eye whenever he can if he is to get a chance this season. In my view we need four strikers, as we had in the days of Bergkamp, Henry, Kanu and Wiltord (and Jeffers was also in the squad at that time) and Akpom is surely in pole position to be that fourth man now.
Yaya Sanogo is seemingly off to Ajax for the season to try and find out what foot each boot goes on. That being the case I would say that Chuba Akpom might just have finally started to put an end to Sanogo's faintly ridiculous time as an Arsenal player. Anyone watching Akpom and Iwobi play could not possibly begin to think that Sanogo is a better player than these two lads. They can get the ball down and lay it off, or run with it, in a way that Sanogo could only ever dream of. I'm sure many would point to Sanogo scoring four goals against Benfica last year but that doesn't change the fact that he doesn't have the football ability of Chuba Akpom. Akpom might well not make it, but he looks a far better bet than Sanogo. Indeed, if Dennis Bergkamp turns Yaya Sanogo in to a top striker over the next season then the man really is God.
Posted by DvbrisG at Wednesday, July 15, 2015